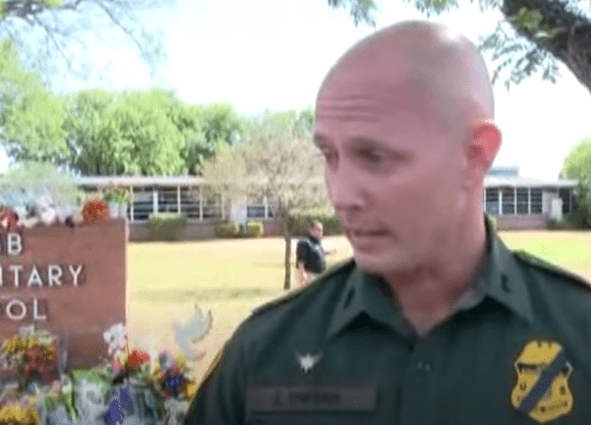 CBP agents and local officers were uninvited by the White House to a Sunday memorial in Uvalde. (YouTube)

UVALDE, Texas – On Sunday President Joe Biden traveled to Uvalde, Texas, to meet with those grieving the loss of their loved ones after last week’s massacre of 21 people at Robb Elementary School.

However, he wasn’t willing to visit with many of the men and women who responded to the May 24 shooting — and risked their lives to kill the crazed gunman, Breitbart reported.

According to a senior Customs and Border Protection source, the officers received the invitation late last week. Many of the law enforcement personnel had accepted and were scheduled to attend the private address from the president. Nevertheless, things changed and they became persona non grata—unwelcomed at the event.

“Biden administration officials uninvited many of the Border Patrol agents and other law enforcement officers who responded to the Robb Elementary School shooting from a meeting with the president scheduled for Sunday in Uvalde,” Breitbart reported. “Despite the event being planned for a large open-space facility, administration officials cited space as a reason for the retracted invitations.”

Late Saturday evening, the Border Patrol was notified the President could only meet with 7 of the more than 80 agents who responded to the shooting.

Mid-level CBP managers were tasked with determining who would be excluded, according to a Breitbart source with the agency. Those who were disinvited will feel as if they were having their roles in the rescue minimized, the source said.

“It appears now as if this planned meeting was nothing more than a photo opportunity with the law enforcement community,” the source said.