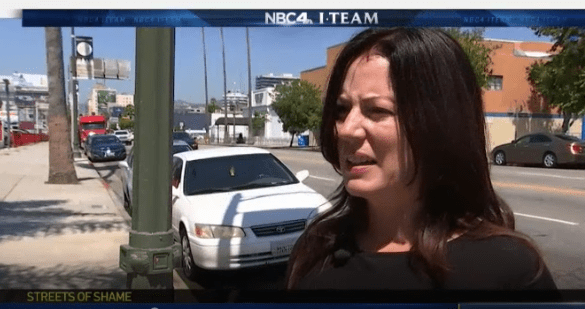 LOS ANGELES – A California woman had a bucket of diarrhea dumped on her. She was reportedly assaulted by a homeless man who pulled her out of her car, dragged her into the middle of the street and poured a bucket of hot feces on top of her.

Heidi Van Tassel said that the disgusting incident took place near the Hollywood Walk of Fame in Los Angeles. Tassel said she was getting into her car when a man, who appeared to be homeless, attacked her.

“It was diarrhea. I was soaked, and it was coming off my eyelashes and into my eyes,” Van Tassel said. “Paramedics who came to treat me said there was so much of it on me, that it looked like the man was saving it up for a month.”

She added that the feces got inside her car as well.

“He just kept pouring it and splattering it all over me,” she told NBC4.

Van Tassel was rushed to Hollywood Presbyterian Hospital and tested for infectious diseases caused by contact with feces — something she will have to do every three months.

The man who attacked her was identified in court records as Jere Blessings, a transient with “schizophrenia and psychotic disorders.”

Blessings was charged with battery and taken to jail.

Van Tassel, though, said Blessings would be better off under psychiatric care.

“He doesn’t need jail time,” she said. “He needs mental health care. I have empathy for him because he needs help.”

California accounts for most of the country’s homeless population, Fox News reported. Despite throwing hundreds of millions of dollars at the problem, the number of homeless in Los Angeles County has risen for the third time in four years. The most recent count released in July by the Los Angeles Homeless Services Authority shows that there are nearly 60,000 homeless people living without permanent shelter on any given night. In the city of Los Angeles, the number of homeless in 2019 jumped 16 percent to 36,000 while the number of chronically homeless – those who have been living on the streets for more than a year – rose 17 percent.

Following the attack, Van Tassel said she repeatedly called the Los Angeles Police Department for information on the case but that her calls went unanswered.

“It’s so traumatic. The PTSD that I’m dealing with is beyond anything that I’ve ever felt,” she said. “There needs to be some kind of help for the victims of these crimes.”

Calls to the LAPD for comment by Fox News were not immediately returned.