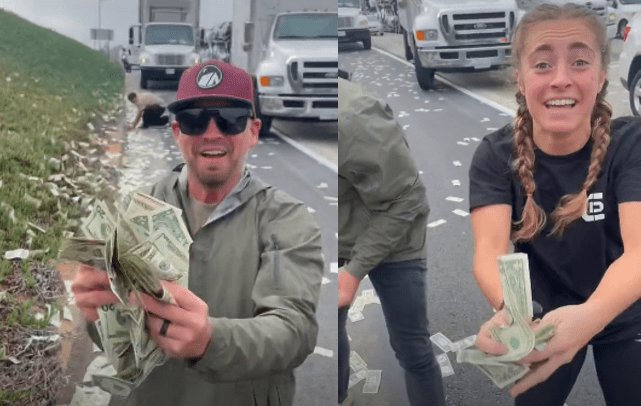 CARLSBAD, Calif. — An armored truck spilled a load of U.S. currency on a California freeway Friday. The fluttering loot created a cash-grab frenzy that resulted in two arrests, according to the California Highway Patrol.

The traffic-halting incident occurred about 9 a.m. on Interstate 5 near Carlsbad as the truck’s door flew open sending bills flying all over. Motorists stoped their vehicles to snatch what they could, Fox 5 San Diego reported.

A video posted on TikTok by user Demi Bagby showed people grabbing cash like they were kids scrambling for candy knocked out of a piñata. Some hooted and hollered with enthusiasm while posing with a wad of cash in their hands in the middle of the road, as traffic was at a standstill, New York Post reported.

this is the most insane thing I have ever seen

“This is the most insane thing I’ve ever seen,” Bagby says in the video. “San Diego has shut down, literally it has shut down.”

The armored truck driver tried to retrieve the paper currency but soon realized it was a futile effort. He then began recording those absconding with the money.

Soon after, CHP officers were on scene keeping motorists off the freeway and retrieving bills, which they placed in plastic bags, according to Fox 5. 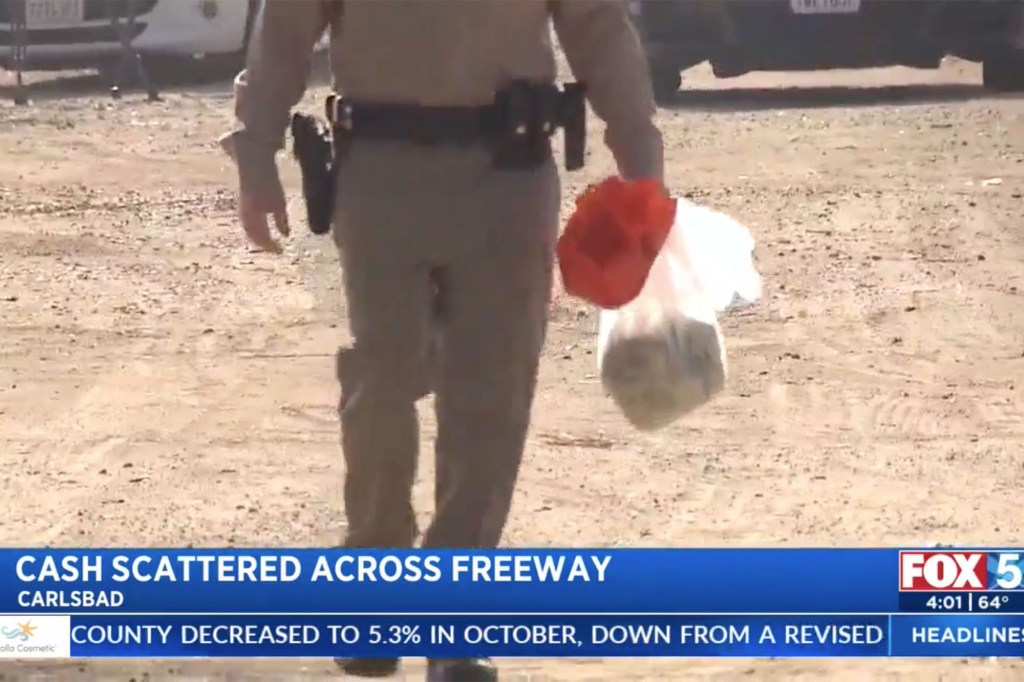 The California Highway Patrol demanded money taken from the scene be returned. (Fox 5)

The armored vehicle, from Sectran Security, Inc., remained pulled over on the freeway as officials investigated how the doors opened.

Law enforcement authorities notified the public that it is a crime to take the cash as a result of the mishap, and is demanding that anyone who took some loot to return it immediately.

“If you found money on the freeway, it is not your money,” CHP Sergeant Martin said at an afternoon news conference. “It belongs to the FDIC (Federal Deposit Insurance Corporation) and this armored truck and the bank. It needs to be returned.”

A man and a woman were arrested on suspicion of taking some of the cash after getting locked out of their vehicle on the freeway, according to the CHP.

It’s not immediately clear how much cash was taken during the frenzy, the Post reported.

Travis Fisher originally believed there had been a crash up ahead when traffic came to an abrupt halt, he told Fox 5.

He initially believed drivers who were leaving their vehicles and running forward were rushing to help people in need before he realized it was a free-for-all grabbing at the floating bills.

“There was a bunch of cars in front of me that all stopped, came to a complete stop,” he said. “I see all these things floating around and I realize it’s money. It was pretty crazy. Just everywhere, there was a sea of bills, everywhere.”

The FBI has joined CHP in the investigation.