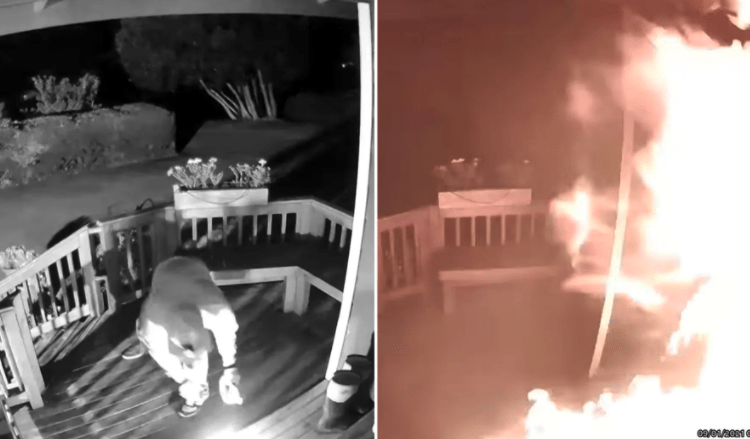 KING COUNTY, Wash. — An arsonist was recorded on video dousing a family’s porch with an accelerant and setting the home on fire. The suspect remains at large, according to authorities.

Firefighters responded the residential fire in Enumclaw — about 40 miles southeast of Seattle — around 4:30 a.m. on Wednesday. The family managed a safe evacuation to their backyard, King County Sheriff’s Office said, according to Q13 FOX.

KCSO released surveillance footage (watch below) from the home that shows a hooded arsonist walk onto the porch early in morning while carrying a canister that investigators say was full of flammable liquid.

The suspect is seen dumping the accelerant onto the porch before igniting it. As flames burst into the air, the arsonist flees the scene.

Moreover, law enforcement officials said this was the second fire set at the home in just two weeks, FOX reported.

The family’s car was set ablaze on Aug. 19, which would seem to indicate the attacks are personal.

“We are very concerned,” Sgt. Tim Meyer told Q13 FOX. “Arson is always a targeted crime and in this case, even more so where we have two of these in just two weeks.”