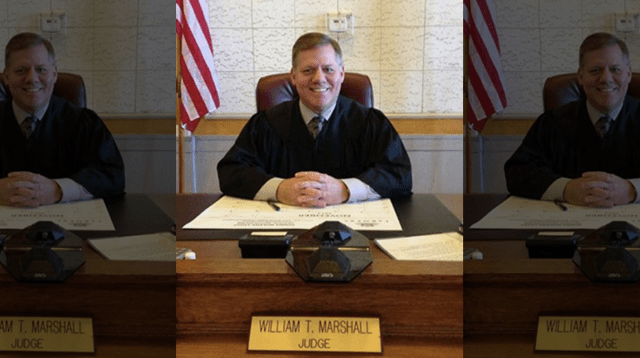 [et_pb_section admin_label=”section”]
[et_pb_row admin_label=”row”]
[et_pb_column type=”4_4″][et_pb_text admin_label=”Text”]COLUMBUS, Ohio – Thousands of court cases heard by a former southern Ohio judge are being considered for review after the judge’s family accused him of repeatedly coming to work drunk.

The Cincinnati Enquirer reported that the state public defender’s office was overseeing the review of all 2,707 cases before Scioto County Common Pleas Court Judge William T. Marshall, 62, which involved prison time or other court supervision. At least 1,200 of those cases reportedly were heard since Marshall was first hospitalized for alcoholism in 2013, according to USA Today.

As the Enquirer reported, Marshall’s family filed guardianship papers in February that sought control of his personal and financial affairs. They argued that Marshall “reportedly has had many occasions where he either failed to appear for work as a common pleas judge or showed up to work while under the influence” and claimed that without a guardian, the judge would “want to return to drinking and continue his self-inflicted death sentence.”

Court documents indicated that Marshall has been hospitalized at least three times since 2013 and was ordered to rehab as part of his sentence for driving under the influence following a car crash.

“That’s [2013] when we have concrete evidence that his drinking was severe enough to be severely interfering with his life and potentially with his ability to make fair choices from the bench,” Ohio Public Defender Tim Young told the Enquirer.

Scioto County Prosecutor Shane Tieman expressed skepticism about the review, telling the Enquirer, “I don’t think there are going to be that many if any cases that have problems. Everything is written down, recorded on video and on audio … obviously [Marshall] had an issue but that it won’t turn out to be as big an issue as they are making it.”

Messages from Fox News seeking comment from Marshall or his attorney were not returned.

In March, the Enquirer published an investigation indicating Marshall was involved in a sex-trafficking ring based in the southern Ohio city of Portsmouth. The report cited a federal wiretap affidavit against a prominent local defense attorney, Michael Mearan, which alleged Mearan promised his female clients that he would arrange lenient sentences and probation requirements for them from friendly judges and parole officers so long as the women would agree to be pimped out.

The affidavit mentioned a judge, whom some women identified to the Enquirer as Marshall, who acted “in collusion” with Mearan and received women from him. Three different women said they had been approached to either have sex with Marshall or work as a prostitute for Mearan.

The judge denied any involvement, telling the Enquirer: “Are you serious? I would never do anything like that.”

Marshall spent 16 years on the state bench before his retirement last year. Weeks later, the Ohio Supreme Court’s Board of Professional Conduct suspended Marshall from practicing law for six months after the judge “improperly confronted” Ohio State Highway Patrol officers who had written his daughter a speeding ticket.

“I didn’t like the trooper,” Marshall told a county prosecutor when asked about his behavior, according to The Enquirer. “He didn’t listen to me. There used to be a code in this county  – I’m a judge and he shouldn’t have written my daughter [the ticket.]”

Intoxicated woman calls police to report DUI, gets herself arrested