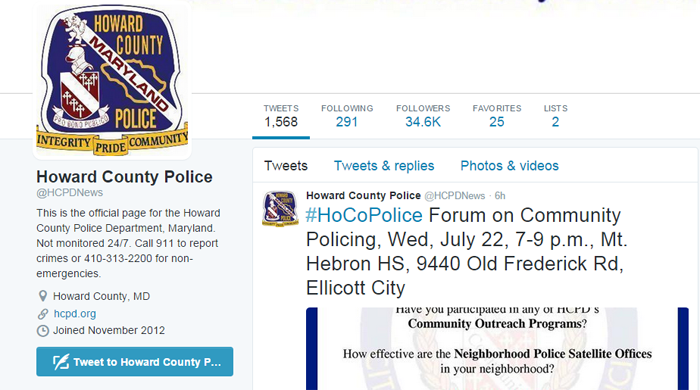 As communications professionals in law enforcement, our role is to provide information to the public in the way they will best receive it. The challenge at this particular moment in time is that our population is comprised of two distinct groups: those who use social media as their primary source for news, and those who feel uncomfortable, and even intimidated, by it.

In order to reach our entire audience, it’s important to use a combination of outreach efforts through social and traditional media. Last year, my agency faced an active shooter incident inside Maryland’s Columbia Mall in which three people died. Of course, we started to provide information to the press and the public almost immediately using social media. At the time, we had about 5,000 followers on Twitter and 10,000 followers on Facebook.

Less than two hours after the first shots were fired, we held a live press conference from the parking lot of the mall with our chief of police. Before I introduced him, and again at the conclusion of the briefing, I encouraged the public and reporters to follow us @HCPDNews on Twitter for breaking news and accurate information about the case.

What happened next was interesting. Within the first five minutes, we had 3,000 new followers. About an hour later, an additional 4,000 were added. After our next live press briefing, another 2,000 joined us. Within 24 hours, we had grown to 20,000 followers on Twitter and almost 16,000 on Facebook.

We promised to be the most timely and verified news source for the story. We told the public that they would get information through social media at the same time reporters were getting it. We kept our promise. While other media outlets were reporting incorrect information that had leaked from the investigation, thousands of people chose to stay with the police department as their primary news source.

When I became the PIO for my agency 15 years ago, I stood at a fax machine to send out press releases and then depended on the media to get the message out. I hoped they would get it right, not edit too much, and make space in their papers or newscasts for the information. We’ve come a long way. Now, using social media, I can get the story out, in its original form, to an almost infinite audience. And that’s great for reaching the people who are actively engaged in social media.

But what about those who aren’t engaged, or feel overwhelmed by the world of hashtags and Hootsuite? We need to reach them, too. And while it may seem like the majority of people you know are on Facebook (Hi, Mom!), it’s often a limited foray into social networking and not their primary source for news. Many people still feel most comfortable getting updates from an evening newscast or a newspaper.

Who knows how people will choose to receive information 15 years from now? But this dichotomy is a PIO’s reality today.

When the call came out for our mall shooting, I began tweeting right away, confirming that the shooting had occurred and that a PIO was heading to the scene. As people who were in the mall were undoubtedly texting and calling their loved ones, I expected that the social media chatter was about to explode. I wanted to make sure my agency was part of the conversation from the very beginning.

But within the first hour, we also were prepping for a press conference and writing an official news release. We continued to post confirmed details on social media, but we were mindful of the reporters and members of the public who wanted the information in a more traditional way.

This is our job as communications professionals—to talk to the public in the ways that will reach them most effectively. In this case, many people who had never before engaged in social media jumped on to follow the details of this event. They began to see its power and benefit, and that engagement continues to grow. I was surprised to see that we didn’t lose followers once the mall story was over. People have stayed with us. We’ve continued to grow. In fact, I’m happy to report that a year later, the Howard County Police Department now has more 33,000 followers on Twitter.

SHERRY LLEWELLYN is the civilian director of media relations and public affairs at the Howard County (Md.) Police Department. She serves as the agency’s primary spokesperson and media advisor to the chief of police.