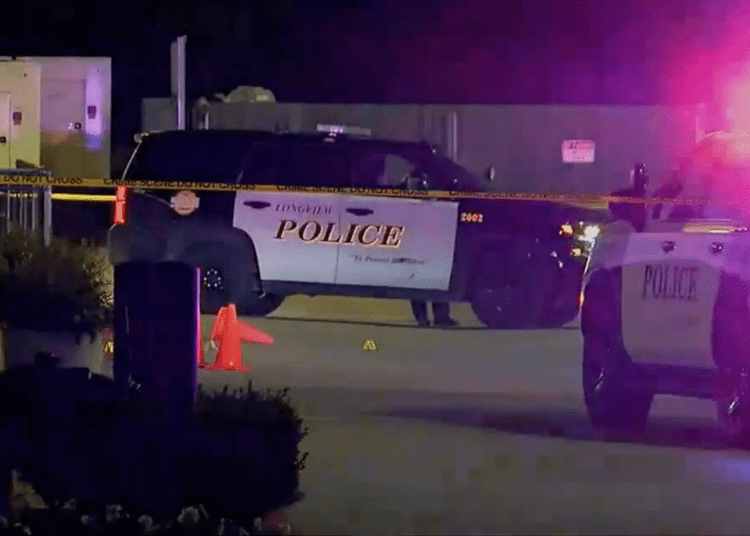 A Kilgore police officer was attacked by an armed man while working security at a hospital in Longview. (Screenshot KLTV)

LONGVIEW, Texas – A Texas police officer who is employed by the Kilgore Police Department was involved in the fatal shooting of a violent combatant with a firearm while working an off-duty security assignment at a hospital in the city of Longview, according to law enforcement authorities.

The Texas Rangers are investigating the fatal officer-involved shooting, which took place Sunday about 9:00 p.m. at Hospitality Health ER on McCann Road in Longview, according to Kilgore Police Chief Todd Hunter.

The deceased suspect was identified as Calvin L. Brown 61, a resident of Longview, according to DPS Sgt. Adam Albritton. The deadly encounter occurred as the officer was checking vehicles in the parking lot of the medical center when he was confronted by Brown, who produced a weapon, KLTV reported.

The two struggled over control of the pistol, but the officer drew his own firearm to stop the threat, according to the chief.

“He was unable to disarm him,” Hunter said. “He used his service weapon to stop the aggression and protect himself.”

The Kilgore Police Department provided the following details in a press release:

On 11/27/2022 a Kilgore Police Officer was working an off-duty security job for Hospitality ER in Longview. Shortly before 9 p.m., the KPD Officer was checking the parking lot when an adult male confronted him. During the encounter, for unknown reasons, the male pulled a pistol from his person and threatened the Officer with it. The Police Officer immediately began to struggle with this suspect over control of the weapon to keep the suspect from shooting him. As the struggle intensified the Officer pulled his weapon and fired in an attempt to stop the aggression, striking the suspect. Immediately following the shooting the KPD Officer summoned ER staff who attempted life-saving measures. A short time later the male was pronounced deceased by ER staff. The KPD Officer was not injured in this altercation. The Longview Police Department and Longview Fire responded to the incident. The Longview Police Department held the incident scene until the Texas Rangers could arrive to take over the investigation. A pistol was recovered at the incident scene.

Hunter said that Brown had been in the area for hours prior to the fatal encounter, according to KLTV.

“We’ve watched the video. Preliminary results show us that this individual got here at 5:30 and had been walking around or had been in the parking lot for hours. We’re unsure of why. So the investigation continues.”