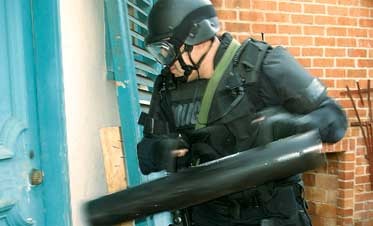 Some of you may have suffered that sinking feeling of realizing you busted down the door of the wrong house. Your mistake was innocent, but it's unpleasant apologizing to a blameless homeowner who, when confronted with masked men in dark clothing with weapons drawn, looked like a deer caught in the headlights. Worse is explaining it to your police chief.

Even in law enforcement, mistakes happen. The problem is police mistakes seem more egregious in nature, making for good headlines on the 6 o&#39;clock news. Unfortunately, mistakes also can cost money, particularly if the recipient of the mistake files a civil suit in an attempt to get compensation for the wrong they suffered. Be that as it may, courts know police officers can and will make reasonable mistakes. It's simply the nature of the job. After all, police officers deal with human beings involved in criminal activities and whose behavior is often unpredictable.

The U.S. Supreme Court issued a decision regarding a mistake by law enforcement officials involving a search for African American suspects who resided in a specific residence. The problem: The suspects moved out of the target house three months earlier. So, the search uncovered three Caucasian residents who were roused out of bed and made to stand naked for roughly two minutes before the officers realized their mistake.

The Facts
In Los Angeles County v. Rettele,1 deputies from the Los Angeles County Sheriff's Department had been conducting a three- to four-month-long investigation of a fraud and an identity-theft crime ring beginning September 2001. The suspects were four African American individuals, one of whom owned a 9mm Glock handgun. The deputies obtained a search warrant for two houses where the suspects were believed to reside. The warrant authorized the search of the homes and three of the suspects for documents and computer files. In support of the home search, the deputies relied on various sources, including DMV reports, mailing address listings, Internet phone records and an outstanding warrant.

Unfortunately for the deputies, they did not know the first house had been sold in September to Max Rettele, who moved into the house with his girlfriend, Judy Sadler, and her 17-year-old son, Chase Hall. All three individuals were Caucasian.

On the morning of Dec. 19, 2001, deputies were briefed regarding the search. They were informed they were looking for three African American suspects, one of whom owned a handgun. At around 0715 hrs, the deputies knocked on the door of the Rettele residence and were met by Hall. The deputies entered the house after ordering Hall onto the floor. The deputies arrival awoke Rettele and his girlfriend. They were confronted by deputies with guns drawn as they lay naked in their bed. The deputies ordered the two individuals out of bed, who protested that they were not wearing any clothes. Rettele got up and attempted to put on some sweatpants. The deputies told him not to move. Rettele's girlfriend also got up and tried to cover herself with a sheet. They were held at gunpoint for roughly two minutes before Rettele was permitted to obtain a robe for his girlfriend. Rettele then dressed himself. Within three to four minutes, both were dressed and sitting in the living room.

By that time, the deputies realized their mistake. They apologized to Rettele and his girlfriend, thanked them for not becoming upset, and left after a few minutes.2 The deputies conducted a search of the second residence, where they located and arrested the three suspects, who were later convicted.

The Court's Opinion
Rettele and his girlfriend filed a federal civil-rights lawsuit against Los Angeles County, the Los Angeles County Sheriff s Department and various members of the Sheriff s Department. They alleged the police violated their Fourth Amendment rights by recklessly obtaining the search warrant and conducting an unreasonable search and detention. The federal district court disagreed, deeming the warrant properly obtained and the search reasonable. It also held that in the alternative, the individual deputies were entitled to qualified immunity because any violation of Fourth Amendment rights was not clearly established.

The U.S. Supreme Court took the case and reversed the Ninth Circuit Court of Appeals. In addressing the Ninth Circuit s assertion that after seeing Rettele and his girlfriend, the officers should have realized they were not the subjects of the search warrant and did not pose a threat, the Supreme Court did not hesitate to reject its unsound proposition.4 The Supreme Court asserted that after confronting Rettele and his girlfriend, the officers had no way of knowing whether the African American suspects were somewhere else in the house. Further, the presence of some Caucasian individuals did not eliminate the possibility that other individuals of a different race resided there as well. The Court also stressed that [j]ust as people of different races live and work together, so too might they engage in joint criminal activity.5

The Supreme Court also noted that the officers were permitted to secure the premises before deciding whether to continue with the search. It cited its prior decision in Michigan v. Summers6 for the proposition that in determining the reasonableness of a search, courts must balance the intrusion on personal liberty against the officers concerns of preventing flight in the event that evidence is found, minimizing the risk of harm to themselves and engaging in an orderly completion of the search. The Court found that the officers orders given to Rettele and his girlfriend were permissible, and perhaps necessary, to protect the officers safety. The Court stated that blankets can conceal weapons, and in this case, one of the suspects was known to carry a weapon. According to the Court, [t]he Constitution does not require an officer to ignore the possibility that an armed suspect may sleep with a weapon within reach.7

The Bottom Line
In this case, the officers did what was necessary to secure the room and ensure other persons were not in the residence or did not present a danger to the officers. The officers did not make Rettele and his girlfriend stand naked any longer than necessary to protect their safety. Immediately after recognizing their mistake, the officers allowed the pair to dress and left within 15 minutes of their arrival. Recognizing that unfortunately, innocent people sometimes bear the brunt of reasonable mistakes in the execution of valid warrants, the Court found the officers did not violate the Fourth Amendment's prohibition against unreasonable searches and detentions.

This case illustrates an excellent example of reasonable mistakes occurring during the execution of a valid search warrant and of police officers taking command of the situation, realizing the mistake, making a quick decision not to detain the suspects any longer than necessary and apologizing for the mistake. While their actions did not prevent a civil-rights lawsuit, it did minimize the likelihood Rettele s and his girlfriend's claims would be successful.

Officers must learn to accept that mistakes happen, deal with them and avoid exacerbating an already negative situation.

Do not construe this column as legal advice. Each police officer should consult with an attorney in their jurisdiction for legal advice on any specific issue.