North Dakota police officials are wisely protecting their own... 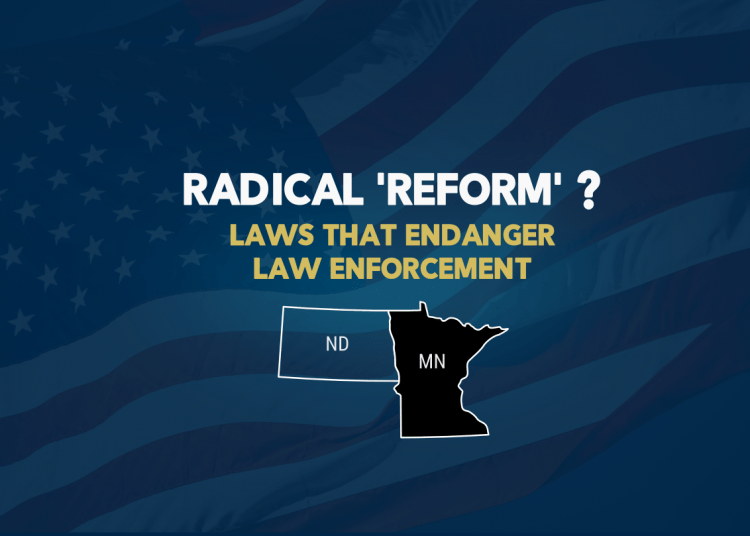 FARGO, N.D. – North Dakota law enforcement agencies say they will no longer assist other agencies from the bordering state of Minnesota— after Minnesota lawmakers passed stringent “use of force” standards outside established U.S. Supreme Court Law. The change in Minnesota law seems to have led to an immediate, unintended consequence: less assistance and support from North Dakota agencies along the border of the two states.

Prior to the new law, Minnesota officers could respond to deadly threats and use deadly force according to case law established by the United States Supreme Court under Graham v. Connor (1989). That standard applies to the fourth amendment’s test of “reasonableness” to an officer’s decision to use force and it takes into consideration that law enforcement must make “split second decisions” in the course of their duties. The motive or intent of the suspect cannot be taken into account after the incident and law enforcement is judged based on what they know at the time rather than an analysis that includes additional information at a later time. The new Minnesota law has now radically changed all that.

Minnesota replaced the Fourth Amendment with a three-part “test”

Instead, Minnesota officers must now go through a “three-part test” before using any force—yes, according to the new law, officers must perform a text while in the middle of a life-or-death situation in response to a suspect’s imminent deadly force.

It’s a shocking and dangerous “standard” according to experts. Fortunately, law enforcement leaders in North Dakota are not willing to subject their officers to such dangerous standards in dangerous situations.

Fargo Police, West Fargo Police, and the Cass County Sheriff’s office all border Minnesota and have suspended all operations in the state of Minnesota for the foreseeable future. The three agencies say without the proper education on the new law, both public safety and officer safety is at risk.

“It’s frustrating and concerning. We never want to leave our other law enforcement partners feeling like they’re out on their own and that we’re not able to respond,” West Fargo Police Chief Denis Otterness said.

While it was a difficult decision, Otterness says it was a necessary one. He added it’s unclear how long it will be until Minnesota and North Dakota agencies partner up again.

“These are high-risk, high-liability situations and we have to have our staff properly trained before we ask them to go out and do the very difficult job they have to do,” Otterness said.

“I certainly don’t want to send one of our officers over there who’s involved in a deadly force scenario, and it’s found later, ‘Well, you’re in violation of Minnesota law and now you’re going to be charged with a crime.’ Whereas if the same situation happened in Fargo, they would not be charged with a crime,” Fargo Police Chief David Zibolski said.

“Can you train someone to understand two different legal force standards in a second? These are very dynamic, two to three second decisions that happen and lives are at stake here,” Zibolski said.

As tough as it is, Zibolski says there will be no exceptions made, as his officer’s safety and ability to lawfully navigate the new statute in high-stress situations is the top priority.

Travis Yates, author of “The Courageous Police Leader: A Survival Guide For Combating Cowards, Chaos & Lies” has trained officers in both states and he applauds the North Dakota police leaders for defending and protecting their officers.

“While I feel for the officers in Minnesota, any standard that violates the well established Supreme Court Guidelines are dangerous for both law enforcement and the citizens they serve and any leader that cares for the rule of law and for the safety of their officers, have to make this decision,” Yates explained.

Yates said that it would be unheard of for any legislative body to impose a law that clearly violates the highest court in the land in any aspect of society—with the exception of law enforcement.

According to Yates, the most disturbing part of the new law is that the threat “must be likely to occur even when a police officer is not present.” Any rational person should recognize the foolishness of attempting to make such a prediction. And it’s an “impossible” standard that would take an actual psychic to predict the future, but Minnesota legislators now expect officers—in the middle of a deadly situation—to second-guess themselves and hesitate. And never mind the most absurd lack of understanding and guidance following the new Minnesota law: officers could be killed while second-guessing themselves and second-guessing the likelihood of violence and imminent threats.

“For some reason, in the midst of increased violence across our country, law enforcement is being targeted by politicians and it is placing the very men and women those politicians are asking to enforce the laws they pass to place their lives in even more danger,” Yates said.