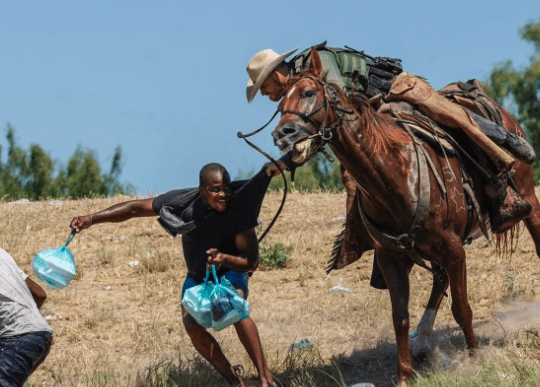 INDIANAPOLIS — The National Police Association has filed a Freedom of Information Act (FOIA) request for the findings of the “investigative work” done by U.S. Customs and Border Protection’s Office of Professional Responsibility, on the allegations made against Border Patrol agents on horseback of “whipping” migrants. The FOIA request also seeks all records, including emails, texts, and other communications between the White House and the Department of Homeland Security (DHS) about the incident.

On September 19, 2021, mounted Border Patrol agents conducting routine protection duties were photographed intercepting illegal aliens attempting to cross into the United States. Some of those photographs captured the agents using their reins in a twirling motion to direct the horses and to keep the migrants at a distance. Some photos showed the agents taking hold of the migrants to push them away from the horses to protect the migrants from being stepped on.

Upon publication of the photos, the agents were falsely accused of “whipping” the migrants. This despite the freelance reporter who took the photos stating no such thing happened. The official investigation came immediately. It was followed just as quickly with false and defamatory attacks against the reputations of the agents from the highest levels of government.

“What I saw depicted about those individuals on horseback, treating human beings the way they were, is horrible.” – Vice President Kamala Harris

“I was horrified by what I saw.” – DHS Secretary Alejandro Mayorkas

Spokesperson for the National Police Association, Sgt. Betsy Brantner Smith (Ret.), stated “It is past time for the Biden administration to release the findings clearing these falsely accused law enforcement officers. The results of the investigation are no doubt being withheld to keep from embarrassing the people who defamed the agents. Apologies need to begin immediately.”

The NPA’s Freedom of Information Act filing can be viewed here: https://nationalpolice.org/main/wp-content/uploads/2022/02/NPA-CBP_Request.pdf

The National Police Association is represented in this FOIA request by C. Peter Sorenson of the Sorenson Law Office.