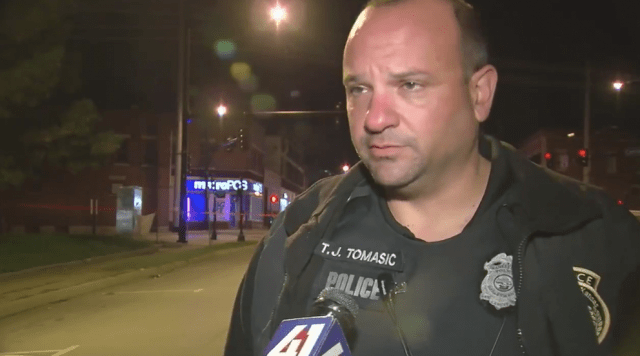 He confirmed four people were dead at the scene and five others who had been shot were transported to nearby hospitals. Tomasic said he believes those five are in stable condition, KSHB reported.

No one was in custody and police “do not have a good enough description yet to put anything out for a suspect, or suspects, we don’t even know how many,” Tomasic said.

The four people who died were all Hispanic males. Authorities did not identify them further. Five others were taken to local hospitals, reportedly in stable condition, NBC News confirmed.

Police said they had no reason to believe the shooting was racially motivated and that it appeared to be an isolated incident.

The weapon that was used was a handgun, police said.

On scene near 10th and Central where officers responded to a shooting. 9 total people were shot 4 of the 9 are dead. We are told the suspect entered the bar Tequila KC and started shooting.
Police are still looking for the suspect. @41actionnews pic.twitter.com/5kwX69IkVF

Agents from @ATFKansasCity are responding to the shooting scene at 10th and Central in Kansas City, KS. @KCKPDHQ for information and updates. pic.twitter.com/u9hnYvD25R

Agents from the Bureau of Alcohol, Tobacco, Firearms and Explosives’ (ATF) Kansas City office were responding to the shooting.