Illegal immigrants need to be rescued atop border wall 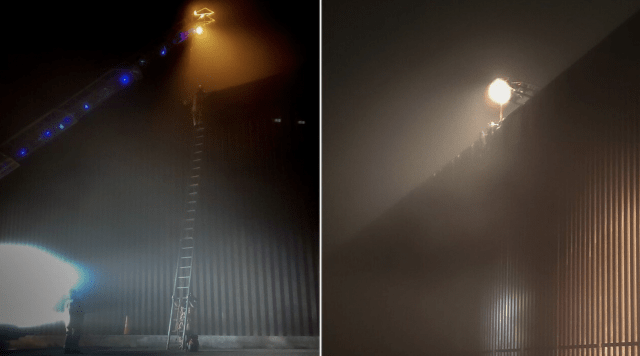 Three people were stuck on top of the new border wall around midnight on Sunday in San Diego. (U.S. Customs and Border Protection)

SAN DIEGO – Three people were rescued over the weekend after they were found trapped in “a precarious situation” on a new section of border wall near San Diego, according to officials.

A U.S. Customs and Border Protection news release said that around midnight Sunday, agents on patrol saw three people stranded on top of the wall near Otay Mesa. The man and two women perched on the barrier attempted to enter the U.S. illegally in dense fog by ascending the San Diego Sector’s new 30-foot, steel bollard wall before getting stuck, according to officials. The trio was abandoned by smugglers at the top of the wet, slippery wall, reported CBP, calling it “a precarious situation.”

“These three were very fortunate to not have fallen from the top of the wall, which could have resulted in serious injury or death,” CBP San Diego Sector’s Acting Chief Patrol Agent Aaron Heitke said in a statement. “These dangers are not important considerations to smugglers, who place an emphasis on profits over safety.”

As a result, agents requested assistance from the San Diego Fire Department to get the group down safely using a ladder truck.

Once on the ground, agents questioned the group and found all three were Mexican citizens illegally trying to cross into the United States, Border Patrol said.

A 36-year-old male, a 20-year-old female, and an 18-year-old female were transported to a nearby Border Patrol station for processing. It was unclear how they ascended to the top of the wall, FOX News reported.

The new stretch of border wall includes 14 miles of 18-foot, primary steel bollard fencing built in San Diego County as part of President Trump’s campaign promise to build a wall along the southern border. It has a secondary 30-foot steel bollard barrier behind.

The new construction replaced 8-foot landing mats, usually supported by a steel mesh behind them.

The project to install 14 miles of replacement barriers began in May 2018 and is now complete. The secondary project began in February 2019 and it includes 2 miles of wall that did not exist before, officials say.

Trump visited the San Diego project in September and described it in glowing terms — even signing his name on the barrier.

“So it’s a very powerful, very powerful wall, the likes of which, probably, to this extent, has not been built before,” he said.

How effectively the new barrier deters migrants and stops crossings is tough to calculate. The construction of the wall, however, did coincide with a sharp decline in apprehensions. In August 2019, there were 3,326 apprehensions in the San Diego sector, down from 6,880 in March and 5,884 in May, FOX reported.