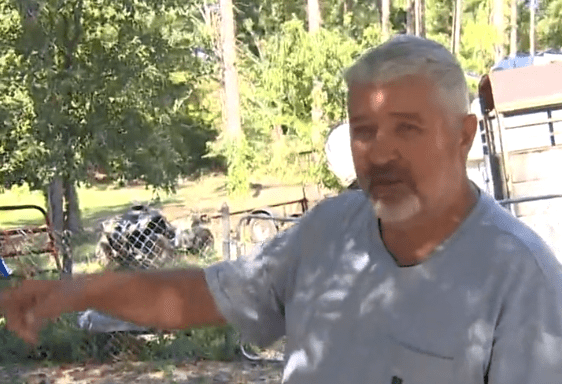 Dog owner John McClain said his pup "Archie" alerted him to an abandoned baby in his shed. (Twitter)

LIVINGSTON, Texas – A baby girl is in stable condition and recovering in the hospital after a husband and wife found the infant abandoned and injured in a shed on their Livingston property thanks to their alert dog. The baby’s father has been arrested, accused of dumping his daughter before taking off in a stolen vehicle on Sep. 24.

The Texas couple, John and Katharine McClain, found the bruised, discarded baby outside their home Saturday morning after their dog Archie kept barking.

“I went and opened the door, and the baby was looking up at me,” dog owner and resident, John McClain told ABC 13.

A baby girl was rescued by a Livingston family after she was abandoned in their shed. The real hero of the story? Archie the dog: https://t.co/ytPgVbJj5o pic.twitter.com/yQYAAFnFH0

The baby’s father reportedly left his daughter in the shed before stealing a car on Sept. 24, ABC 13 reported.

Livingston Police Department charged him with felony injury to a child causing serious bodily injury, felony child endangerment/abandonment, and felony vehicle theft. He is in Polk County Jail on a $200,000 bond.

“I’m a mom, you know, and how could someone just leave a baby?” McClain’s wife Katharine said.

The McClains called the police when they heard a loud noise earlier in the day. Surveillance footage shows the suspect attempting to break into their son’s trucks before stealing their neighbor’s car.

Later that morning at 9:30 a.m., the baby girl was discovered in the McClain’s shed due to the non-stop barking of their dog, the Daily Caller reported.

Local officials identified the suspect/father only as “Guynes.” They said he acknowledged abandoning his daughter, but did not recall where he left her, ABC13 reported.

They baby girl is 8-months-old. She is recovering in the hospital with a cast on her leg.

The baby’s mother thanked the McClain’s for finding her daughter. The woman said she has never been concerned about her daughter’s welfare with her father, according to ABC 13. She claimed that Guynes has a criminal history but was otherwise “a loving father.”

However, his recent antics would seem to contradict her assessment.