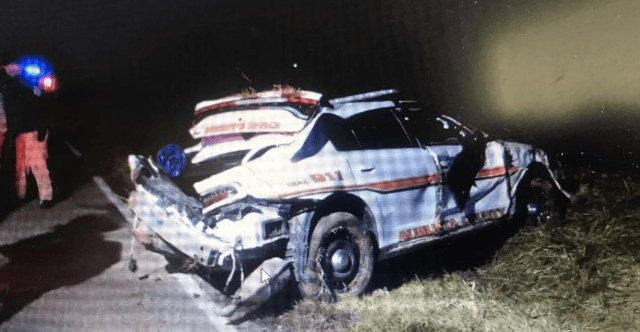 AUGUSTA COUNTY, Va. — Several Augusta County deputies responded to the Sheetz Gas Station on Stuarts Draft Highway just after 12 a.m. on Sunday, Jan. 5 for a report of a man brandishing a firearm at another Sheetz customer.

While responding to this incident, one of the deputies was involved in a single vehicle crash in the 1000 block of Augusta Farms Road. The collision occurred when the deputy failed to negotiate a curve on Augusta Farms Road near Jossie Lane, WHSV reported.

Deputy Michael Stogdale’s vehicle went off road and rolled several times, and the deputy was trapped in his patrol car until he was extricated by Fire Department personnel.

He was transported to Augusta Health by the Stuarts Draft Rescue Squad to be treated for his injuries.

Stogdale was in stable condition upon arrival, and he was released from the hospital after being treated for a fractured arm and lacerations, according to the Augusta County Sheriff’s Office Facebook post.

The crash was investigated by the Virginia State Police, and Stogdale was subsequently charged with reckless driving.

The sheriff acknowledged that excessive speed was the reason for this crash.