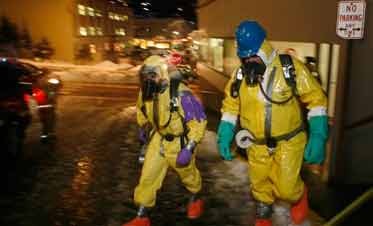 JUNEAU, Alaska — An eighth letter containing suspicious powder and addressed to a governor's office was intercepted in Alaska on Tuesday, and it bore a Texas postmark like suspicious mailings to other governors this week, officials said.

A spokeswoman for Gov. Sarah Palin said the letter was received Tuesday in Juneau at a mailroom about a block from the Capitol, and it was addressed to Palin's predecessor Gov. Frank Murkowski, who left office two years ago.

And while those seven letters were determined to contain harmless powder, results of tests on the Alaska letter were pending Tuesday night, the FBI office in Anchorage said.

In Alabama, the Department of Public Safety said Tuesday the letter received at its state Capitol contained a harmless food substance. In Missouri, a chemical analysis by the state health lab found the powder appeared to be bleached flour, spokeswoman Nanci Gonder said Tuesday.

FBI spokesman Rich Kolko in Washington, D.C., said the Dallas FBI office is investigating and warned other states to be on the lookout for similar letters.

In Juneau, the building housing the mailroom was emptied of workers, and a hazardous materials team collected material from the scene.

The worker who opened the letter showed no signs of exposure to a hazardous material and was released, said Richard Ethridge, a Juneau fire department division chief.

Palin, the former Republican vice presidential candidate who splits time between Anchorage and Juneau, was in the capital on Tuesday to host the annual holiday party at the governor's mansion. The event went on as planned.

The FBI declined to say if the letters intercepted Monday were specifically addressed to each governor or written to a generic "governor's office" address.

Alabama's public safety director, Christopher Murphy, said the letter received in Montgomery did not specifically target Gov. Bob Riley but declined to elaborate on what it said.

The letters forced the evacuation of the Capitol in Helena, Mont., and the closing of a major street in downtown Montgomery for several hours.

Kolko said even hoax letters could be considered a crime.

Associated Press writers Chris Blank and David A. Lieb in Jefferson City, Mo., Phillip Rawls in Montgomery, Ala., and Anabelle Garay in Dallas contributed to this report.