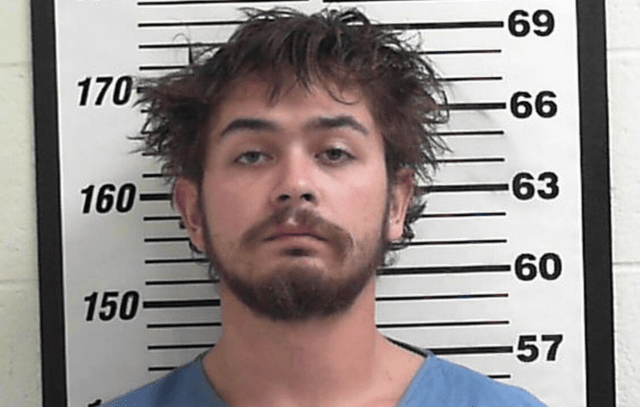 Jeffrey Langford, 24, was charged with first-degree murder after his mother was found dead in North Salt Lake, Utah, on Saturday. (Davis County Jail)

NORTH SALT LAKE, Utah – A Utah man was arrested and accused of killing his mother as well as filming the crime scene to post it live on Facebook.

Jeffrey Langford, 24, was taken into custody after investigators determined he gave them conflicting statements about the death of his mother, 45-year-old Graciela Holker, at a home in North Salt Lake on Saturday.

Police were responding to a report that a woman had killed herself, but were also told Langford posted a live video to Facebook showing the woman seemingly deceased as he said aloud that he wasn’t going to jail, the Deseret News reported.

When officers arrived at the scene, Langford allegedly left the apartment, covered in what appeared to be blood.

“Jeffrey had a reddish-brown substance on his face and clothing consistent in appearance to blood,” an officer wrote in an affidavit. “Jeffrey also exhibited signs of being intoxicated.”

Langford claimed his mother had been drinking alcohol and shot herself in the head — but investigators said that according to three videos Langford posted online, his mother “would be unable to manipulate a firearm and fire another shot to her head.”

Holker was found dead in the apartment, where a revolver was also found. Langford initially told investigators he did not touch the gun that night, but once it was found with the hammer cocked, he said it was because “he was going to kill himself,” but said it stayed in his mom’s hand.

Langford again reportedly provided conflicting information. When police said they found casings in his room, Langford allegedly said “he removed the gun from Holker’s hand, unloaded the spent casings, and reloaded the revolver,” according to the news outlet.

The 24-year-old reportedly told police he posted the live videos as “a call for help.” Investigators said when they asked Langford what happened when his videos ended, “he paused for a time but later admitted that he did shoot her after the video.”

Holker suffered from at least one gunshot wound, police said.

Langford was arrested and charged with first-degree murder, obstruction of justice and a misdemeanor count of carrying a dangerous weapon under the influence of alcohol and/or drugs.