The End of Law Enforcement

I have purposely waited to write this for quite a long time.  Maybe I was in denial of what I was observing or maybe I thought something would change but nothing is changing and despite the efforts of some, I don’t see anything changing until the leadership in our profession wakes up to what is happening right under their noses.

For the last 15 years, I have traveled the world as a trainer and consultant while at the same time serving as a law enforcement professional on a full time basis.  I absolutely love this profession and I love meeting others that serve throughout the world. I often find myself meeting and talking to officers from agencies with a few officers to those with thousands. I have come to know these tremendous servants in every state in our country and it is remarkable that despite the location and the slang, we all face similar issues.

But in recent the years, the tone has changed.

This new tone, has me fearing the worst. While those that serve in law enforcement are more educated, more professional and simply better than ever before, our leaders are failing them and it is that failure that I believe could doom law enforcement as we know it.

That doom lies in the morale, attitude and depression of those behind the badge that is laid at the feet of weak, cowardly leaders that should be serving us.  If the damage continues to be done, these fearless heroes, this great calling known as law enforcement, will end as we know it.

In recent years, as I have spoken to law enforcement in classrooms across America, a concerning theme has emerged.  While it is one I have suppressed because I was in denial, it is a message that I need to discuss.

These officers fall into primarily three categories and I will discuss what I am hearing from each group. It is something you need to hear and it something that we all must immediately address. While I know I am speaking in general terms and I certainly don’t speak for everyone, I have heard this enough to know that it needs to be addressed.

Law Enforcement Service: 20+ Years
These men and women have served their communities for over two decades. When they entered the profession, law enforcement was still about LAW ENFORCEMENT. Bad guys went to jail and the officers took it upon themselves to make sure their community was safe from evil. Car stops, search warrants, arrests and a no-holds attitude to upholding the law was what the job was about. Our leaders were primarily military veterans and many had experience in Vietnam and other arenas. An activist lying about law enforcement wasn’t an issue. A politician using us to further a false narrative would not have been accepted. These leaders called it the way they saw it. A liar is a liar and if law enforcement was right, they defended that right. Today, as this group enters retirement eligibility, they are retiring. They aren’t waiting around. They have seen the moral breakdown in the leaders that they once placed their trust in. Some are staying because financially they must but they are looking for a way out and they will find it and we will all suffer from the loss of their experience and their dedication.

Law Enforcement Service: 10-19 Years
These officers are some of the most miserable in our profession and while I know I am not speaking for every single one of them, I’ve heard from enough of them to know that it’s a problem. These men and women are at least half way to their pension. That, combined with their age, has them staying in law enforcement against their better judgment. Many are trying to get off the streets, afraid of the next “viral” video showing them doing nothing wrong but ruining their reputation and ability to work forever. Some are still leaving, despite the financial burden of leaving a few years short of the golden egg but the gold isn’t worth what they have to risk. Every day, outrage is blasted on news channels and much of that outrage is just that….outrage and nothing else. These officers are more scared of YouTube than violent criminals and they know that many in leadership roles are either silent or will throw them under the bus for just about anything. They are in regret that the profession they were promised never happened and they are counting the days to leave.

Law Enforcement Service: 1-9 Years
This group of officers is our future. They grew up in the digital age and despite the newly minted “anti-cop” sentiment, they signed up for the job. They are truly heroic for doing it and they are in the middle of chaos. They’ve seen their fellow officers arrested or fired for simply doing their job. Almost all of them know a fellow officer personally that this has happened to. The fear is real. Many of them have ended up on the internet and blasted as racist or something much worse for doing nothing wrong. They have now realized that they work in the only profession that can ruin you for doing nothing wrong. They have stopped working. Some call it the “Ferguson Effect” but they just call it trying to save their ass. It’s not worth staying and the majority are looking to leave. Law enforcement may have a recruiting problem but the problem that comes with training and investing in new officers only to see them flee a profession that has bred cowardly leaders, will crush us and it is coming.

The Solution
I know what you are thinking and you are right. I’m not speaking for everyone. There is no doubt that there are some reading this in every category that I’m not speaking for and if that is you, thank you.  We need you but if you are honest, you know this is accurate and we must save ourselves. The attacks and lies against law enforcement are nothing new but how our leaders have responded (or not responded) is new and that is where the root cause of this depression lies.

STOP THE COWARDS, LEARN THE SOLUTION

Law enforcement leaders must go on the offensive in defending those that have done nothing wrong. We must stop with the silence or the proverbial “we are investigating” nonsense. With video technology, we know immediately whether we have done something out of policy or whether we are wrong. We must use the same tools those that look to defame us use. From social media to press conferences to explaining what citizens are viewing on body cameras, we must step up for our officers and we must do it in a proactive fashion.

The great men and women doing this job are truly suffering and that suffering is playing out in every negative you can think about. From suicide to the divorce rate and substance abuse, there is real damage being caused when good officers simply do their job and are in constant fear of what may happen to them.

The bad news is what I wrote above but the good news is that we can change it.

If we don’t, the future might be called law enforcement but that will not be what it is and I shutter to think what that will look like. 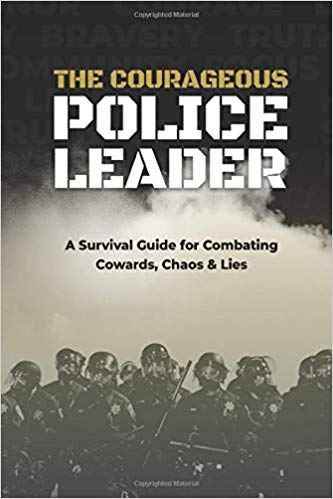 What Are Your Thoughts?
Tags: courageous leadershipcowardsLeadershippolice

Effective Leadership in an Era of Questionable Morality

Some people are not cut out to be police officers