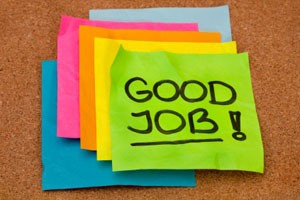 In a controlled study, a group of fifth grade students were each given a puzzle to solve. Half of the students who solved the puzzle were praised for being smart. The other half who solved the puzzle were praised for the high level of effort they gave. The students were then given the option to select another puzzle of their choice. One puzzle was similar in difficulty to the one they had completed successfully and the other one was significantly more difficult. The students were told they probably would not solve the more difficult puzzle, but would learn more from trying to solve it.

What puzzle do you think the “smart” kids chose?

What puzzle do you think the “effort” kids chose?

The study concluded that when we praise strictly for intelligence or correctness, the students got the message that being “smart” or “correct” is the key to winning the game. Therefore, they choose easier tasks to complete to keep the praise coming while avoiding new or difficult tasks. This is common because intelligence is typically perceived to be out of our control. Since it is outside our control, being viewed as “not smart” or “incorrect” gives the student no way to respond to potential failure because they see themselves as a victim of their supposed limited intelligence.

When praise for intelligence/correctness has been the primary method of praise, you will hear excuses like “I haven’t been taught that,” “That isn’t the way I was shown before,” and “That isn’t how I learn.” All of these excuses are made from a victim mentality and are a self-preservation technique to keep from feeling dumb/embarrassed for being incorrect. Notice how each of the statements point the blame for the failure away from the student.

However, when we emphasize praise primarily for effort, the students see learning as a variable they can control. They may have been incorrect in the knowledge or action, but praising them for taking on the task and putting forward their best effort leads to more learning. This also gives them a simple solution for responding to failure – PUT IN MORE EFFORT!

When we routinely praise for effort, you will hear student questions like, “How can I do better?,” “Could we try this next?,” and “Can we do that again?” All of these questions show the student taking responsibility for learning and having a willingness to put in more effort.

Success at learning is less dependent on intelligence than it is on grit, curiosity, and effort. The essential ingredients to creating great police officers during training are providing them with challenges, praising their effort while handling them, and then teaching them how to overcome those challenges. The rest is up to the learner and their EFFORT.

Please do not hesitate to contact us if you have ideas to share or suggestions for improvement. Your thoughts or comments on this blog are always appreciated either below or on our Facebook page. You can also follow us on Twitter at @tbl_leadership.

Continue saving the world one call at a time and as always, LEAD ON!

*** Parts of this blog were paraphrased from the excellent book “Make it Stick” by Peter C. Brown with some of my own additional thoughts. I highly recommend this book to all trainers. ***