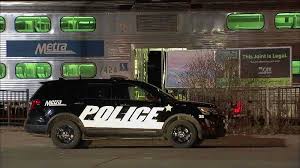 ABC 7 reports that a suspect in a murder in Evergreen Park (IL) was killed after a shootout with police on a Metra train in north suburban Deerfield Friday night.

Agents with the South Suburban Major Crimes Task Force located a suspect on the train at the Lake Cook Road Station at about 10:30 p.m., officials said.

The suspect was in a seat on the first floor of the train and went upstairs after being approached by agents, police said. A struggle ensued and the suspect pulled out a gun and fired at the agents, who retreated and fired back.

Approximately 40 people were on the train at the time.

The suspect was struck in the shootout and transported to a nearby hospital where he was pronounced dead.

Authorities have not released the suspect’s identity. The suspect’s weapon was recovered at the scene.

Two agents were hospitalized for minor injuries and have been released.