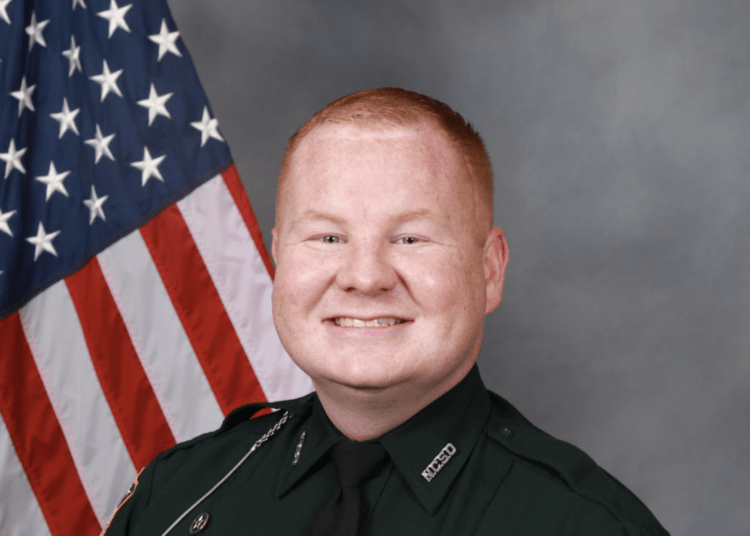 “It is with great sadness that I announce Deputy Josh Moyers has passed away this afternoon, September 26, 2021 at 2:19 PM at UF health in Jacksonville.  Please keep Josh’s family and fiancé in your thoughts and prayers as we navigate this terrible tragedy,” Leeper said.

NASSAU COUNTY, Fla. — A Nassau County deputy was critically wounded after he was shot during a traffic stop Friday. He continued fighting for his life Saturday – with the outlook seeming grim — authorities said, as the manhunt for his attacker continues.

The 2:30 a.m. shooting occurred in Callahan in Nassau County, about 12 miles from Jacksonville, and left Moyers clinging to life.

The deputy was shot in the face, below his right eye, then in the back after collapsing to the ground, the Times-Union reported.

By Saturday, authorities were losing hope that Moyers would pull through.

“Unfortunately, Deputy Moyers is not going to survive,” Sheriff Bill Leeper predicted, according to the news outlet.

Please pray for Deputy Josh Moyers, his family, fiancé, friends, and his NCSO brothers and sisters during this difficult time. pic.twitter.com/r9QchXcoay

Leeper said Moyers had been planning a wedding with his fiancée prior to being shot, Fox reported.

The suspect, identified as Patrick McDowell, 35, stands 5 feet, 10 inches tall and is considered by authorities to be “armed and dangerous.”

“We now have a murderer on the loose in our community,” Leeper said.

More photos of our suspect Patrick McDowell. Please call police ASAP if you see him. pic.twitter.com/M6QwbGlyzR

A person in the vehicle with McDowell at the time of the shooting has been cooperative with authorities after remaining at the site of the shooting, according to Jacksonville’s WJXT-TV.

There are more than 300 individuals from multiple law enforcement agencies engaged in the manhunt. They are focused on a five square mile area encompassing more than 3,000 acres.

“This guy is dangerous. If you’re in a home and he breaks into your home and you have a gun, blow him out the door cause he’s like a rabid animal. He will kill you with his mindset. What he did to that deputy, was uncalled for, unnecessary and he needs to pay for it,” Leeper said.