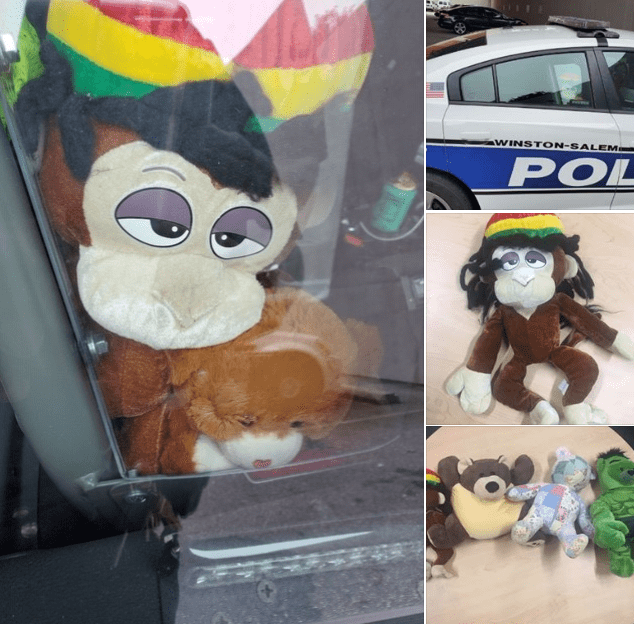 The plush toy monkey, seen in the window of a marked cruiser drew outrage as a “racist display.”

“In the future, we will confirm our stuffed animals are not offensive. I apologize to any community member that found this circumstance to be offensive,” Chief Thompson said in an official statement.

The apology was issued after an internal investigation determined the officers involved had “no ill intent,” WXII reported.

Travis Yates, The Author of “The Courageous Police Leader: A Survival Guide to Combating Cowards, Chaos & Lies” says that it’s a mistake to automatically apologize based on outrage alone.

“We are living in a time where one person with their own motives and bias can create chaos within police organizations and it is a dangerous precedent to apologize when in fact the agency has done nothing wrong,” Yates told us.

According to the Charlotte Observer, complaints about the toy began showing up on Facebook Monday morning. A woman calling herself “Divine Deva” posted a 24-second video showing a white officer in the passenger seat of the police car that had the stuffed monkey in the back. She asked that people share the video on social media.

“Y’all see this in the back of their car…It’s the most racist thing I have ever seen. That’s crazy,” she says in the video.

“It makes me question his intent towards the black men and women in my community,” she posted.

In the now viral video, Deva said she was “38 hot”, a slang that refers to being so mad she wants to shoot someone.

Deva went on to say that “At some point my son will walk these streets if only to go to the corner store or maybe to a friends house (using a back path like we use to back in the day) or travel these roads only to go to school or even work; if I don’t speak up now about the disrespectful mannerisms that are being displayed in our community    then they will continue and I will always fear that he as a young black king will be misjudged at the hands of one that has been granted authority to control his life whether it be by miss judgment of a bullet or miss judgment of action resulting  in jail time   . I will always speak on what’s right because me speaking on what’s right now could save ones life tomorrow.”