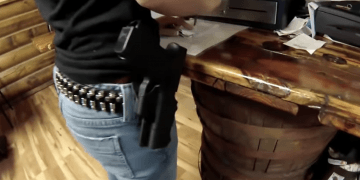 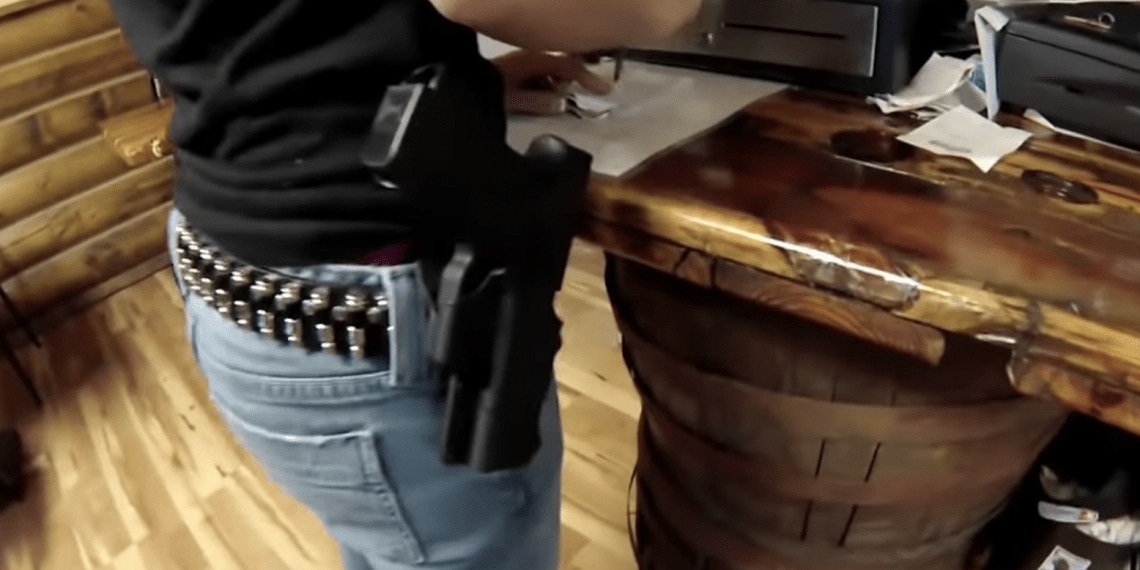 Shooter's Grill in Rifle, Colo., is a place where the owner and waitresses open carry. (ABC News/YouTube)

RIFLE, Colo. – Shooters Grill in Rifle, Colo. sounds like something out of Western movie. But it really exists. Moreover, it is no place for patrons squeamish around firearms since the owner and waitresses are packing heat.

“It’s the safest restaurant in the country,” said Lauren Boebert of Shooters Grill, a restaurant she owns and operates where all waitresses open carry a firearm. She spoke with Breitbart News on Monday while attending a rally in support of the Second Amendment in Richmond, VA.

Shooters Grill is located on the South side of East 3rd Street in downtown Rifle. Gun-themed and old-timey American restaurant serving traditional breakfast, burgers & steaks. Stop by our restaurant and enjoy great food and a VERY safe place to eat it. Breakfast, Lunch, or Dinner, our food and service will make you happy. That is our place: Happy, safe and fun. We’re armed and ready to feed you.

“I would argue that it’s the safest restaurant in the country,” Boebert replied, explaining the origins of her restaurant’s policy. “We started just by real-life experiences. Times got tough. We got tougher. We took a risk, and opened a business. We named it ‘Shooters Grill’ as a spin-off of Rifle, and we just opened to serve good food to our community, but real life happened, and a man was physically beat to death outside my restaurant. As a new business owner and a mother of four, I didn’t have time to sit through a class or pay my government a fee to prove my innocence and wait for their [firearm] permit, so I took action and I began to open carry to protect my people.”

Boebert continued, “From that, an advocacy for the Second Amendment was born, and even further than that, an advocacy for our freedom that is being stripped away from us by legislators on a regular basis. So, for the past seven years, I’ve been advocating not only for the Second Amendment, but for the Constitution of the United States of America.”

Boebert recalled Beto O’Rourke’s call in 2019 for gun confiscation during a Democrat debate among presidential candidates. Consequently, O’Rourke later monetized his statement as merchandise to fundraise his since-terminated presidential campaign.

“You may remember last year, when Beto O’Rourke emphatically stated on the debate stage, ‘Hell yes, we’re going to take your AR-15s and your AK-47s,’” Boebert said. “Well,  like most Americans, I kind of grumbled and complained on my couch when I heard that, but then he doubled down and said he was coming to Aurora, CO, and I decided, again, to take action. I drove three hours with my Glock on my hip, I grabbed the microphone, I looked Beto O’Rourke in the eye and told him, ‘Hell no, you’re not taking our guns.’”

ABC News Story about Shooters Grill, which aired in 2014: