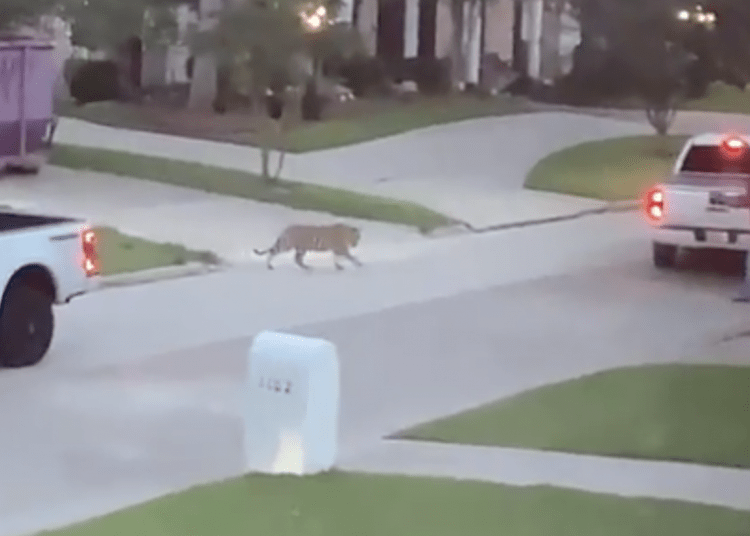 HOUSTON — A man whose tiger was found wandering around a Houston neighborhood Sunday night has been arrested, police say. The tiger’s whereabouts are unknown, according to reports.

A neighbor says families spotted the tiger lounging in the front yard of a home while out on an evening walk. Video of the encounter shows the tiger walking toward a Waller County sheriff’s deputy who lives in the neighborhood, NBCDFW reported.

A photo of the scene pic.twitter.com/wRZ4Bk59sY

When the deputy pulled out his service weapon, another man from a nearby home reportedly came out shouting, “Don’t shoot!”

The deputy tells the tiger’s caretaker, “Get your tiger back inside.” No shots were fired.

The Houston Chronicle’s Julian Gill reports that the apparent caretaker said he was with “the zoo” when confronted but did not elaborate.

The big cat was later corralled back inside the home, then the caretaker rushed the tiger away in a white Jeep as police arrived, the Chronicle reported.

Earlier Monday, a spokesperson for the Houston Police Department said Cuevas was out on bond as a suspect for a November 2020 murder.

Tigers are not allowed within Houston city limits unless a handler, such as a zoo, is licensed to have exotic animals.

However, tigers are relatively popular exotic pets in the state. A 2018 report from the Austin American-Statesman found that Texas has the second-largest tiger population in the world, only behind India. According to the report, an estimated couple of thousand tigers live throughout Texas, with many living in backyards and going unregistered with the state.