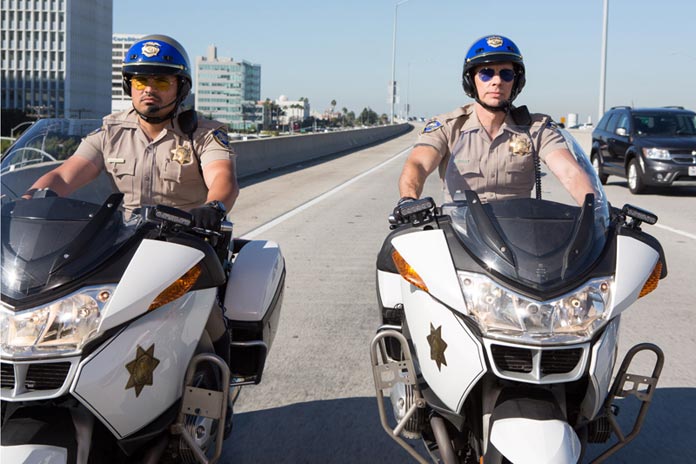 You don’t really know me, but hear me out anyway. I saw the trailers and promotion for your CHiPs movie and I have a few things to say on behalf of CHiPs fans everywhere, and believe me, there are a lot more than you think. I know because I am Larry’s Wilcox’s personal assistant and I run his website and Facebook fan page, which has about 75,000 fans and is growing every day. I am also in charge of the CHiPs 40th Anniversary Reunion gathering, which will take place this September. Thousands of fans are interested in attending; in fact, it is a near certainty that we will sell out as we have more interest than space to accommodate. Those are my “credentials” and this is what I’d like to say:

Your movie just isn’t CHiPs. Sure, it’s about the California Highway Patrol, and has two characters named Jon and Ponch, but that’s where the similarities end. Now, I understand when you do a remake you have to freshen it up, I don’t have any problem with that. You didn’t do that though, you just eradicated everything that made CHiPs beloved with its fans (many I need to point out, just like back in the 70s and 80s, are children!) starting with the characters themselves.

You said you yourself are a fan of the show, well then I have to ask, where is Sgt. Getraer? And Grossman, Bonnie, Bariciza, Harlan, Fritz, Turner, Bruce, and the rest of the characters? Not only are they just as beloved by fans as Jon and Ponch, but they were an integral part of what made CHiPs so successful. You see, CHiPs was all about the chemistry between the characters. The banter. The friendships. It was not, as you seem to think, about dick jokes and toilet humor. I’ll grant you that the action scenes do reflect the spirit of the show, but you could have created an updated CHiPs that would have appealed to both new fans AND old. It would have been great to see Ponch navigating online dating, Grossman and Harlan getting caught up in the Pokemon Go craze, Jon loving Facebook, and poor Getraer just trying to make sense of it all-and his new cell phone.

Instead the loyal fans who have loved the show for nearly 40 years and passed that love on to their kids and in many cases, grand kids, got a mess of a movie that completely alienated them-tens of thousands of them. Why were they not important to you? I’ve gotten many messages from fans who have children upset because they can’t see the movie. How do you explain to a little one who loves Jon and Ponch what rated R means? Don’t get me wrong, no one expected a G-rated movie, but you didn’t have to fill it with crude sexual humor and nudity. In the original series, we all knew Jon and Ponch were not choirboys, but we didn’t have to see it. Letting viewers use their imaginations is not a bad thing!

I have to ask; did you actually watch any episodes? I ask because I and most CHiPs fans don’t understand why you completely disrespected the characters. Jon Baker is not an ex-gamer. He’s not a rookie. He’s not a screw up. Jon is a Vietnam vet. He’s a Marine who balances toughness with sensitivity. He’s a cowboy and a dedicated and damn good cop. He has about 5 years’ seniority on Ponch.

Oh and Ponch. Dear, dear Ponch. Ponch isn’t an FBI officer. He was streetwise guy trying to find his place in the world when he met Jon. Jon was the responding officer to a call about someone recklessly riding a dirt bike in the hills. At the time Ponch was hanging out with a bad crowd, but to quote him as he explained to Sgt. Getraer why he wanted to join the CHP: “I realized I’m not one of them so I think maybe I’m one of us.” Ponch also was not obsessed with other guys’ crotches like the one in your movie. Now if it was a parody, fine, I can see how that portrayal would work, but you yourself said your movie was not meant to be a parody at all. So why did you do this? I honestly would love to hear your view. Jon and Ponch were good cops. Cops who cared about the people they served and the humanity of those they arrested, never forgot where they came from, and while they respected the book, they weren’t afraid to bend its rules if it was the only way to solve a problem or save a life.

See, what you don’t understand is CHiPs was not just a 70’s cop show. It wasn’t Shakespeare, no, but it did and does mean a whole lot to a whole lot of people. As Larry’s assistant I have heard so many stories from people who decided to make law enforcement their life’s work because of how Jon and Ponch inspired them. Stories from people who were abused children or living in dysfunctional situations who found hope, comfort and escape in CHiPs. Stories from people who cherish that show for it’s message of friendship and acceptance. As Paul Linke, who played Grossman, so beautifully put it, “We solved problems with our brains and hearts, not with guns and violence.” Throw in some gentle humor, a little romance, great chemistry, incredible action, those gorgeous motorcycles, and the sun and fun of 70’s Southern California, and THAT’S CHiPs.

You and everyone else who remakes old shows need to realize they all come with a fan base, some larger than others, and should respect that. It’s the original fans that made those shows worth remaking after all! They are the reason networks like MeTV and Antenna TV are thriving. They should be respected, as should the cast who made the original show so beloved. CHiPs was cancelled by NBC in 1983, but it remained on the air in reruns for over 20 years. It was the highest rated show on TNT and TBS at the time. Today, 40 years later it’s one of the highest rated shows on MeTV. That’s special.

I leave you with this. Donny Osmond once told a story about how he made fun of his old songs during a concert. After the show, a couple of fans confronted him about it. “They may be corny old songs to you, but they were a part of the fabric of my childhood. How dare you make fun of them,” one said to him, “They aren’t just your songs. They belong to all of us who were inspired, comforted and cheered by them.”

Donny took that to heart. He said he had never realized how much his songs meant to so many, and he has never ridiculed them again. CHiPs is much the same way, as are many of those old shows that have and are being remade. They mean so much to so many, and should be handled with the care and respect they deserve. I hope you will take that to heart the next time you do a TV show remake. Thank you.

Sue Walsh is a freelance writer and editor living in NYC with her husband and two cats. She has a B.A. in Journalism from the University of Hartford.  This article originally appeared at The Medium and we have published with permission from the author.