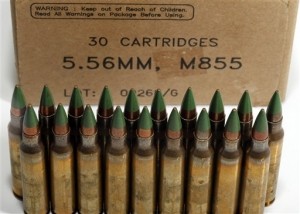 WASHINGTON (AP) — The Obama administration is considering banning a type of ammunition used in one of the most popular types of rifles because it says the bullets can pierce a police officer's protective vest when fired from a handgun.

The rule change would affect only "M855 green tip" or "SS109" rounds with certain types of metal cores. People who already own the ammunition would be allowed to continue to legally own it, but manufacturers would not be allowed to produce, sell, import or distribute it.

In a letter to ATF Director B. Todd Jones last month, House Judiciary Committee Chairman Bob Goodlatte, R-Va., objected to the rule change, saying it would "interfere with Second Amendment rights by disrupting the market for ammunition that law-abiding Americans use for sporting and other legitimate purposes."

Armor-piercing handgun ammunition has been banned since 1986 as a way to protect police officers under the federal Law Enforcement Officers Protection Act. The rifle bullets now facing a ban were long considered exempt because they were used for sporting purposes, such as target shooting.

An ATF spokeswoman, Ginger Colbrun, said Monday the agency is considering eliminating the exemption now because of the production of so-called AR pistols that can fire the same cartridge. The agency is accepting public comment about the proposed change until March 16 at the email address [email protected], by fax or postal mail. Colbrun said a final decision will be made later this year.

At issue is the material in the core of the bullets. As long as the bullet's core does not contain particular types of metal, including steel, iron or brass, the bullet would still be legally available.

Colbrun said 32 manufacturers make roughly 168 types of ammunition that can be used in the rifles and would remain legal.

The semi-automatic AR-15 rifle, a commercially available gun that resembles the military's M-16 rifle, has become wildly popular among gun enthusiasts in recent years. It's also been the target of Democratic lawmakers who sought to ban the weapons after the 2012 shooting deaths of a dozen people at a movie theater in Colorado and 20 children and six adults at a school in Connecticut. Those efforts failed, but gun rights advocates, including the National Rifle Association, warned that the administration would continue a push to ban the popular guns.

In a statement last month about the proposed rule change, the NRA told supporters it was a "move clearly intended by the Obama administration to suppress the acquisition, ownership and use of AR-15s" and other rifles. The group urged its members to write to both the agency and members of Congress to object to the rule change.

ATF's proposed ammunition ban has been under consideration since 2011.