What would happen if police smacked someone with a helmet at the end of a pursuit? 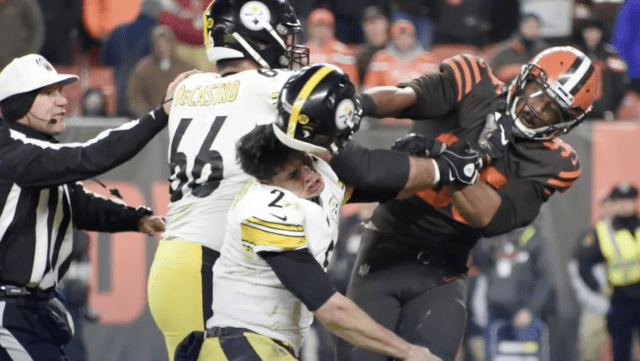 What would happen if police smacked someone with a helmet, or other blunt object, at the end of a pursuit without provocation? We all know the answer in today’s culture. With armchair quarterbacks analyzing every camera angle between here and the nearest satellite location, the officer would get booked for felony assault. Moreover, zealous prosecutors would jostle to represent “the people” in this egregious example of police brutality.

By now millions of sports fans have seen the football fracas that occurred during a game between the Pittsburgh Steelers and Cleveland Browns Thursday night. I’d like to thank the NFL for this timely brouhaha. They helped support an opinion that I articulated in an article just a few days before the game was played; Overkill is the punishment du jour for police officers.

I wrote the editorial piece after a Charleston police officer was arrested for slapping a handcuffed suspect on the head at the conclusion of a foot pursuit and subsequent wrestling match. As a result, he was charged with third-degree assault and battery.

The case infuriated me because I believe it is a classic example of police leadership lacking fortitude and backbone.

Law enforcement is a messy business, and we need courageous leaders willing to go to the mat for good cops who may have stepped out of bounds.

“I’m not excusing the officer’s behavior, but let’s put it in perspective,” I asserted. This is how I made the case:

This is what has been made public:

Police officers are not robots

What is never part of the press report is the emotional element involved in an arrest of this nature. Do not mistake anything that I write with condoning the head slap; I don’t. Police officers need to maintain professionalism at all times, even during highly charged emotional events, but cops are not robots, nor do we want them to be.

Yet we need to keep the circumstances in context when meting out punishment. I handled several cases similar to this in my role as an internal affairs investigator. The disposition at my agency was anything from a written reprimand to a few days suspension without pay.

I understand, that was “then,” while this is “now.” Nevertheless, it doesn’t make it right unless the officer truly opened up a case of “whoop-ass” on the suspect. That would justify a harsh reaction, but it doesn’t appear to be the case in Charleston.

Now, before the “self-righteous” begin to crucify my assessment, consider the following illustrations:

First, if this scene played out in a movie theater, everyone would roar their approval. As a matter of fact, a simple smack to the back of the head is usually too little “street justice” for the audience. While it doesn’t make it right in the “real world,” I simply point this out to demonstrate our societal hypocrisy.

Second, athletics is another part of our culture that can be highly emotional. When an athlete crosses the line of accepted behavior and receives a penalty for “unnecessary roughness,” or “unsportsmanlike conduct,” the remedy fits the “crime.” In football it is a 15-yard penalty. On occasion, a player gets ejected for something that is more egregious. Furthermore, in hockey fist fights are part of the culture with very little public condemnation.

However, with very rare exception, we do not see athletes prosecuted for assault and battery that occurs on the field of play—incidents that stem from an emotional reaction to the physical entanglements; much like a foot pursuit.

Third, my father smacked the back of my head weekly, saying, “That’s for anything I didn’t catch you doing today.” It was a gentle reminder of who was in charge. I suppose in the overkill nature of our culture today, my dad would be prosecuted for battery.

Helmet as a weapon

So, let’s review the incident between the Browns and Steelers, when a player used his helmet as a weapon. Regardless of your opinion of the teams or players involved, this is what we saw:

Joe Buck, who was broadcasting the game for Fox Sports, said, “That’s one of the worst things I’ve ever seen on a professional sports field.”

Here’s the NFL’s statement, according to TMZ Sports:

“The Pittsburgh Steelers and Cleveland Browns organizations have each been fined $250,000 and three players — Cleveland’s Myles Garrett and Larry Ogunjobi, and Pittsburgh’s Maurkice Pouncey — have been suspended without pay for their actions in Thursday night’s game.”

“Garrett has been suspended without pay indefinitely — at a minimum for the remainder of the regular season and postseason — and must meet with the Commissioner’s Office prior to a decision on his reinstatement. He was also fined an additional amount.”

“Garrett violated unnecessary roughness and unsportsmanlike conduct rules, as well as fighting, removing the helmet of an opponent and using the helmet as a weapon.”

“Pouncey has been suspended without pay for three games and fined an additional amount for fighting, including punching and kicking an opponent.”

“Ogunjobi has been suspended without pay for one game and fined an additional amount for unnecessary roughness, specifically for shoving an opposing player to the ground during an altercation.”

“Additional discipline for other players will be forthcoming through the standard accountability process, including those players that left the bench to enter the fight area.”

“Under the collective bargaining agreement, the suspensions may be appealed within three business days. Appeals are heard and decided by either Derrick Brooks or James Thrash, the officers jointly appointed and compensated by the NFL and NFLPA to decide appeals of on-field player discipline.”

The Cleveland Police Dept. is NOT investigating Myles Garrett for assault stemming from the helmet attack on Steelers QB Mason Rudolph, a spokesperson told TMZ Sports.

They asked if the CPD was planning to arrest the 23-year-old and they were told quite simply, “No.”

“The person who was hit would have to file a report. There is no criminal complaint filed,” Cleveland PD Public Information Officer Sgt. Jennifer Ciaccia told TMZ Sports.

I’m not advocating for Garrett, Ogunjobi, or Pouncey to be criminally prosecuted, even though the veteran broadcaster described the melee as “one of the worst things (he’s) ever seen on a professional sports field.” Nevertheless, let’s be clear; these men committed crimes, … while in their respective uniforms, … on the field of play, … during the emotional heat of battle.

How do their actions compare to those of the Charleston officer? There is no comparison, yet the officer is being prosecuted, the athletes are not.

Furthermore, the athletes will all return to the field of play—eventually. The career of the Charleston officer is likely over. Is this part of the justice reform everyone is clamoring about?

The law enforcement leaders in Charleston should have handled the alleged misconduct via the internal affairs process. If the officer’s conduct violated policy, it should be handled with departmental discipline and/or the civil court process if the suspect (victim) felt the need.

The prosecutor should view this unspectacular case as a “rejection in the interest of justice.” For the uninformed, trivial criminal matters get rejected in volume in every courthouse in America daily. So why are we making “examples” out of cops? It’s not because we are being held to a higher standard, it’s because too many leaders lack courage.