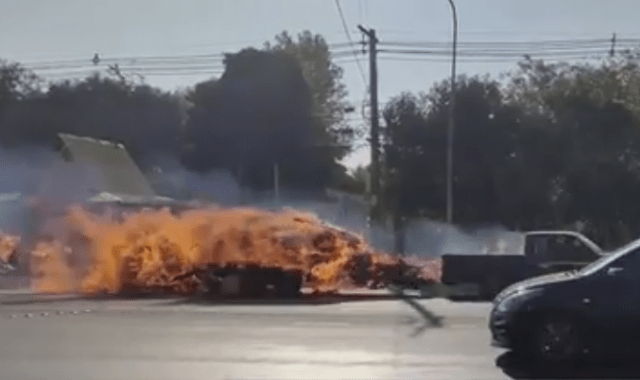 THAILAND — A truck driver in Thailand had to rush his vehicle to safety when the trailer it was towing caught fire in the middle of a busy city. The alarming occurrence in Ubon Ratchathani was captured on video by witnesses to the bizarre traffic hazard.

According to SWNS, the trailer was full of hay the driver was delivering when the blaze occurred.

Chaiyong Tangjai said he wasn’t sure what started the fire, but that he had just changed a tire on the trailer, Fox News reported.

“It was cold that time and I stopped for a moment to fix my tire, but when I drove again people were shouting at me that the truck was on fire,’ he said.

“I didn’t want to stop the truck because I was driving past a school and a gas station, all of which might have been dangerous.”

Fortunately, Tangjai was able to find an empty space to park the vehicle where firefighters were able to extinguish the flames. As a result, no one was injured in the incident.

Motorcycle Officers Fired On While Preparing For Police Funeral