Want a Free, Immediate, Sure Way to Peak Performance? Talk to Yourself 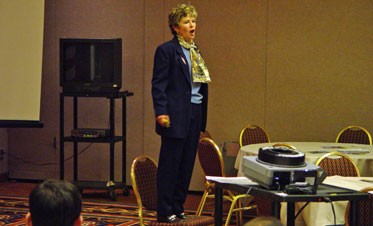 DISCLAIMER: I have little to no tactical experience. My areas of expertise stem from my years as a prosecutor. I say "little to no tactical experience" because I have handled the firearms necessary for bird hunting — but I've never had a duck pull a knife on me. And I've had some defensive pistol training at Gunsite Academy. But while the targets move and yell, they don't pack real guns.

That said, in a recent weekend of firearms training by the incomparable Matt Seibert of Insight Firearms Training Development, I experienced a revelation about the power of self-talk that can be applied not only to tactical situations, but to any other aspect of police work, training, and leadership.

Self-talk is the ongoing inner dialog we all carry on with ourselves. Neuroscientists have established that we self-talk about 150 to 300 words a minute most of the time. It takes a lot of work to silence this inner voice — that's why meditation takes so much practice and discipline. Most of our self-talk is harmless — "Stop at the grocery store after work," "Don't forget Shane's soccer game." But our inner voice can also be a powerful force for peak performance — or failure.

Matt demonstrated this concept in class. He invited one of the bigger guys to the front of the room. Matt was noticeably smaller. Matt had the guy extend his right arm straight out in front of him, clench his fist, and say in a determined voice, "My arm is strong! I can hold my arm up!" Then Matt exerted what appeared to be significant downward pressure on the guy's arm, and it held. Next Matt had the guy maintain the same stance but say in a soft, subdued voice, "My arm is weak. I can't hold my arm up." Matt pushed the arm down effortlessly.

"Right," I scoffed, "How much are you paying the guy, Matt?" Matt beamed as if I was his star student. He had us pair off and repeat the exercise. In spite of my skepticism, it worked just like Matt had demonstrated. I tried it at home with my husband — a big, strong, also skeptical, guy about twice my size. Same result. Go ahead — try it.

The more I thought about this, the more astounded I became. I've written about the power of belief. And I train on it. But, I didn't believe my arm would respond strong and weak just based on what I said — and it did. What I self-talked, was what happened, even though I was disbelieving. Matt deliciously describes this as, "Fake it, 'til you make it." What you tell yourself can profoundly impact your performance, even if you're doubtful. But, tell yourself empowering things, your performance will follow, and you'll become a believer — and that's really powerful stuff.

You can also tell yourself limiting things and ensure failure. On the range, thanks to Matt's and his wife, Sherrie's, instruction, I was shooting a tighter, more consistent pattern than I ever had. Then I had a shot go wide. I clenched my teeth and shook my head, "No." My self-talk began, "S–t!" and took off, "Just when I'm doing good, just when I think I've got it, I mess up." I didn't even realize what I was saying to myself until Sherrie, stopped me. She explained that every time I did that, I reinforced the errant shot. She brought my target back. She had me ignore the wide shot and focus on the tight pattern in and around the bull's eye. She asked,

"Do you remember shooting those?"

"I want you to look at those, look at that perfect shot center."

I did, remembering what it felt like to shoot them.

"Now, I want you to clench your fist, pump it once and say, 'Yes I Can!' With your other hand, touch your thumb to your first finger tip."

I did this. She had me repeat it. Then she returned me to the line and told me to touch my same thumb to my fingertip just before I picked up my firearm to shoot. I did and felt and heard, "Yes, I can!" Bull's eye.

Repeated self-talk — positive or negative — creates neural pathways to our brain. Data we receive through our senses travel these roads. If you want to change a limiting belief into an empowering one, you have to reprogram the negative neural track. That's what Sherrie did when she took my head shaking and negative self-talk and reprogrammed it with a victorious fist pump and "Yes, I can!" paired with the finger touching I could do on the line to trigger the positive neural track. This neuro-linguistic programming technique is called "anchoring." It's a powerful way to program skills to the subconscious.

Put the positive power of self-talk to practice. Whether it's:

Come up with a concise, positive statement of the result you want as if you've already realized it:

On a daily basis, sit comfortably, close your eyes, inhale to a count of three, hold to a count of two, exhale to a count of six. Repeat three times. (This is called Autogenic Breathing. It provides for faster learning and better comprehension.) [5] Then say your positive statement aloud at least five times. Saying it aloud, even if you whisper, engages more of the brain by involving two of your senses — auditory and kinesthetic. [2] Anchor this with a physical gesture you can do on the job when you want to tap into this empowered state — touching your thumb to your fingertip is a good one. At the very least, come up with your positive self-talk statement, write it down, and say it just before you begin the particular task.

A CALL TO POLICE TRAINERS AND LEADERS! Teach the power of self-talk to your recruits, officers and staff. Monitor them and teach them to monitor their own limiting self-talk — like Sherrie did for me. Make this a component of any incident or scenario debriefing. Then help these folks to whom you owe so much discover the power of positive self-talk. It's simple, quick, cheap, and the results are immediate and remarkable. Then get cool with your young recruits and officers by telling them, "Just think how poppin' you're gonna look talking to yourself with no Bluetooth, dude. Now that's tight tech."

The Power of Belief — YOU can create high performers

Share and speak up for justice, law & order...
Tags: AcademyLeadershipTraining

Sergeants can help save us