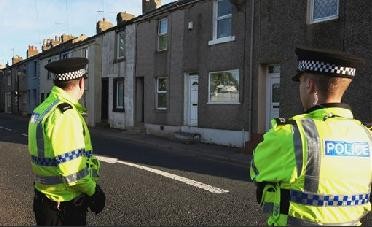 More than 100 detectives were scrutinizing why Derrick Bird, 52, went on a three-hour shooting spree in the northwestern county of Cumbria, blasting many of his victims in the face before committing suicide in isolated woodland. It was the country's worst mass killing in 14 years.

Police urged people to be patient while they worked to uncover a motive for the killings, which shook a country where handguns are banned and multiple shootings rare.

"They are all proper lines of investigation for us," Goulding said, adding police had found no record of any mental health problems or medication taken by Bird.

"My officers and I are absolutely determined to get to the bottom of why this happened," he said. "However, it may not be possible to establish all the answers, because we cannot speak to Derrick Bird."

Goulding said some of the victims appeared to have been targeted and others selected at random.

Eight of the wounded remained hospitalized Thursday, with four listed in stable condition and the other four in good condition. Five of the wounded treated at West Cumberland Hospital had been shot in the face, said Charles Brett, the hospital's clinical director of emergency care.

"There's a predominance of facial injuries in what we've seen," he said. "More than 50 percent of those who survived had some form of facial injury."

The first shootings were reported Wednesday morning in the coastal town of Whitehaven, about 350 miles (560 kilometers) northwest of London. Police warned residents to stay indoors as they tracked the gunman's progress across the county.

Witnesses described seeing the gunman driving around shooting from his car window. Police said there were 30 separate crime scenes.

Bird's body was found in woods near Boot, a hamlet popular with hikers and vacationers in England's hilly, scenic Lake District. Police said a shotgun and a .22-caliber rifle fitted with a telescopic sight were recovered from the scene. Officials confirmed Bird held licenses for both weapons.

In Whitehaven, groups of residents gathered at the local market to remember those who died _ and recount tales of near-misses.

Michael Murray, who is also a taxi driver, was standing near the front of cab stand when Bird, known affectionately as "Birdie," first approached.

"I saw Birdie pull up beside me and he was waving a shotgun out of the window," Murray said. "I ducked to the floor before I could see if he was pointing at me.

"I always got on with Birdie, he had no grudges against me, I suppose that's what saved me. He was a sound guy and a private guy."

"Derrick didn't mix with people very much," she said. "He was very quiet, but not a loner as such."

Prime Minister David Cameron, who plans to visit the area Friday, ruled out any quick review of Britain's stringent gun laws as a result of the killings. Ownership of rifles and shotguns is tightly regulated, and license holders undergo police and medical record checks, Cameron said.

Police said Bird had convictions for theft dating back to 1990, although he had never been to jail, but that didn't prevent him from obtaining a gun license.

Rules on gun ownership were tightened after two massacres. In 1987, gun enthusiast Michael Ryan killed 16 people in the English town of Hungerford. In 1996, Thomas Hamilton killed 16 children and a teacher at a primary school in Dunblane, Scotland.

"There's likely to be leakage, some communication to a third party about an intent to do this kind of killing," Meloy said. "But people who have access to the leakage tend to minimize it or deny it. It is such an unusual or abhorrent event, they don't believe the person is going to do it."

Peter Leder, a taxi driver who knew Bird, said he had seen the gunman Tuesday and didn't notice anything that was obviously amiss. But he was struck by Bird's departing words.

"When he left he said, 'See you Peter, but I won't see you again,'" Leder told Channel 4 News.