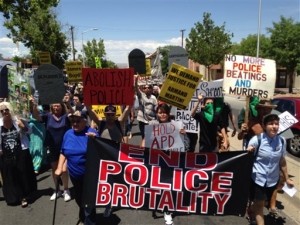 Albuquerque police overreacted during a 2014 standoff with a homeless man armed with knives and then intentionally killed him, a special prosecutor said Monday as the long-awaited murder trial of two former officers got underway.

“All of these shots were no accident or a mistake,” special prosecutor Randi McGinn said in her opening statement about the shooting that set off protests in a city whose police force was under federal investigation.

Defense attorneys for now-retired Keith Sandy and former Officer Dominique Perez told jurors that dispatchers warned officers to use extreme caution given that James Boyd had paranoid schizophrenia as well as an extensive criminal history of aggravated battery against law enforcement in New Mexico and elsewhere.

Segments of police video played by the defense showed an agitated Boyd threatening to kill officers numerous times that March day. The case is about a clash between the duty of police to protect the community and assessing the danger Boyd posed, defense attorney Luis Robles said.

He said Boyd was asked to surrender his knives 33 times but didn’t. “He was shot with his knives in his hands,” Robles said.