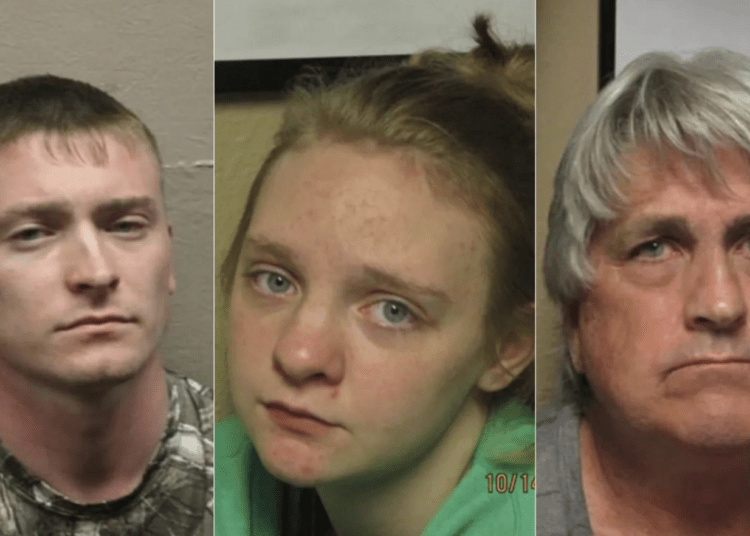 BOLLINGER COUNTY, Mo. — A trio of suspects from Missouri have been arrested and charged in connection with the gruesome death and dismemberment of an Illinois woman who was reported missing Thursday, according to reports.

Eric Nanney, Kaitlyn Morgan, and Ricky Nanney were arrested after Brianna Roberts was stabbed, shot multiple times and had her limbs detached from her body, authorities said, KFVS-TV reported.

“On Thursday, October 14th, 2021, the Bollinger County Sheriff’s Office received a report of a missing person. The missing person was identified as twenty-one (21) year old Brianna Roberts of Illinois,” the law enforcement agency said in a press statement.

Continuing, “Throughout the course of the investigation, it was found that Kaitlyn Morgan and Eric Nanney of Glen Allen, Missouri, were the last known individuals to have had contact with Brianna. The Bollinger County Sheriff’s Office was aware of that information due to responding to a dispute at Kaitlyn and Eric’s residence involving all three individuals on Wednesday, October 13th, 2021. Once that information was determined, Investigators with the Bollinger County Sheriff’s Office and the Missouri State Highway Patrol’s Division of Drug and Crime Control conducted interviews with Kaitlyn, Eric, and Eric’s father, Ricky Nanney.”

“During those interviews, information was obtained in reference to Brianna being deceased due to an assault that had occurred on Thursday, October 14th, 2021,” the sheriff’s office said.

Once that information was obtained, investigators obtained a search warrant for the property, according to Sheriff Casey Graham.

“During the service of the search warrant, human remains were located on the property,” the press statement disclosed. “After those remains were located, it was discovered that the victim was stabbed and shot multiple times. Additionally, it was found that the limbs of the deceased had been removed from the body. Investigators later located what appeared to be additional remains in a separate location along with several other items of evidence.”

It was unclear how Roberts initially came into contact with the suspects. An autopsy is scheduled for Monday, the agency said.

Eric Nanney was charged with first-degree murder, unlawful use of a weapon. armed criminal action, tampering with physical evidence and abandonment of a corpse. His bond was set at $1 million.

Kaitlyn Morgan was charged with first-degree murder, tampering with physical evidence and abandonment of a corpse. Her bond was set at $1 million.

Ricky Nanney was charged with three counts of tampering with physical evidence. His bond was set at $50,000.