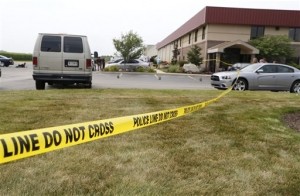 Authorities have not released the victims' names or provided details on what happened in the shooting. But White County Sheriff Patrick Shafer said authorities are not looking for a person of interest — an indication that authorities believe the shooter is among the dead.

Shafer said officers arrived Tuesday morning to find a man lying on the ground next to a car with what appeared to be a gunshot wound and a handgun lying near him.

They subsequently discovered two people inside the parked car next to him, both with what appeared to be gunshot wounds. Both worked at the furniture plant, Jordan Manufacturing Co. in Monticello, Shafer said.

Two men died at the scene and a woman was pronounced dead at a hospital, Shafer said.

Detectives also found a box at the scene, located about 70 miles northwest of Indianapolis, Shafer said.

The shootings were reported about 11:30 a.m. Shafer said the case is still under investigation and he expected to release more details Wednesday, including the names of the three persons. He declined to discuss a possible motive for the shootings.

Jordan Manufacturing's website says it's a family-owned and -operated business that's been in business for more than 30 years. The company makes patio furniture, umbrellas, cushions and pet beds.