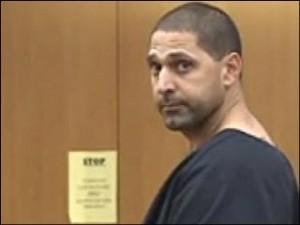 ATLANTA – Serial stabbing suspect Elias Abuelazam is being sent to Michigan to face charges after an extradition hearing in Atlanta Friday morning.

Abuelazam, 33, is accused of stabbing 14 men in Flint, Mich., killing five. He's also accused of attacks on four others in Virginia and Ohio. He was taken into custody Wednesday night at Hartsfield-Jackson International Airport just before he tried to board a Delta Air Lines flight to Tel Aviv, Israel.

Passengers on the flight Abuelazam was scheduled to depart on said he was tense and talking on his cell phone when he was arrested at the boarding gate shortly before takeoff.

They said six police officers led him away without incident.

Abuelazam's mother, Iyam al-Azzam, told Israel Radio that she talked to her son by phone before he was supposed to board the Delta flight, "and he sounded the same as usual, quiet and calm."

She said she was getting ready to pick her son up at the airport when relatives told her he had been arrested. "I do not believe these charges are true," she said. "Elias, my son, is a religious, God-fearing man who always assists anyone who needs help."

In Ramla, a mixed Israeli Jewish-Arab working class town between Jerusalem and Tel Aviv, the shabby, two-story house where the suspect's mother and sister live was dark late Thursday. Neighbors said the two left the house when reporters started gathering there.

Abuelazam appeared to be confused about the extradition process as he stood before Judge Richard Hicks in Fulton County Superior Court Friday morning, at first saying he wanted to fight extradition to Michigan. He made it clear to the judge that he intends to fight any criminal charges against him.

It appeared that the suspect thought the trial would take place in Georgia as opposed to Michigan. Once he understood that the entire trial would not be heard in Atlanta, Abuelazam decided not to fight the extradition.

Abuelazam appeared shackled in prison garb, and without a lawyer.

Later in the morning, Abuelazam's attorney, Edwar Zeineh, arrived from Lansing, Mich., and requested a second extradition hearing Friday afternoon. In court, Judge Hicks said that since Abuelazam had waived extradition, the case is completed.

Zeineh, who said he was hired by Abuelazam's family, spoke to reporters outside the Fulton County Courthouse Friday afternoon.

"He's obviously enthusiastic about defending himself against these allegations," Zeineh said.

The Israeli citizen and legal U.S. resident is charged in just one case out of Flint, Mich., but authorities said more charges are expected there and in Ohio and Virginia. At least 15 of the 18 victims were black but it was unclear whether the attacks were racially motivated.

Investigators said that roughly every four days since late May, the killer approached men on lonely roads at night, asking for directions or help with a broken-down car. Then he'd pull out a knife, plunge it into his victim and speed away; in one case he used a hammer. The youngest victim was 15; the oldest 67.

Abuelazam is 6 feet 4 inches tall and weighs 230 pounds — people who were familiar with him in the Flint area said he was nicknamed "Big Boy."

Jessica Abuelazam, an Arlington, Texas, woman who identified herself as Abuelazam's ex-wife, said she was struggling to cope with the news too.

"I'm shocked," she said in a phone interview. "I'm trying to figure out what's going on."

The trail to Abuelazam began last week, when he was arrested in Arlington, Va., on Aug. 5 during a routine traffic stop. Arlington Detective Crystal L. Nosal said police realized he was wanted on a simple assault warrant in Leesburg, about 30 miles away, but a magistrate released him on personal recognizance, meaning he was responsible for returning to court.

The Leesburg warrant was unrelated to the stabbings, and Leyton said there was no national alert for Abuelazam or his vehicle when he was stopped. "They had no idea at that time that he was involved in these crimes," the prosecutor said.

Authorities impounded Abuelazam's 1996 green and gold Chevrolet Blazer — which police said was described by many of the victims in the assaults.

Police said they found a knife and a hammer in the vehicle during that traffic stop.

Police sources said Abuelazam was cooperating with investigators during questioning, but stopped talking when talk of blood being found inside the car was brought up.

Israeli police said Abuelazam was a suspect in a stabbing attack in Israel earlier this year, but charges in that case were never pressed.

A police commander, who spoke on condition of anonymity, said Abuelazam was believed to have stabbed an acquaintance during an argument about six months ago. Police dropped the case, according to the commander, because the victim would not cooperate with investigators.
(The Detroit Free Press & WDIV contributed to this report.)