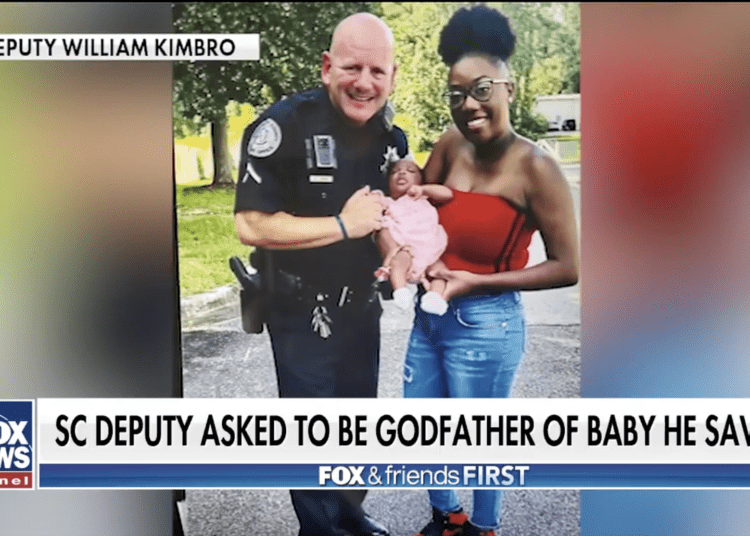 BERKELEY COUNTY, S. C. — Law enforcement has been under fire for weeks now, demonized by activists and politicians, following the death of George Floyd on May 25, with calls to defund and dismantle the police. The negative stories saturate headlines, yet peace officers routinely become quiet heroes in their daily activity. Here are a few examples highlighting the good officers do for their communities.

In a powerful moment caught on camera, South Carolina Deputy William Kimbro saved Kemira Boyd’s choking daughter during a traffic stop in 2019. As a result, this week he became Ryleigh’s godfather, making the encounter a “life-long bond” for both of them, Fox News reported.

“It’s wonderful. … I’m so happy and just blessed. It’s the world to me,” Kimbro told “Fox & Friends First” about the honor, while proudly holding a new coffee mug, which read, “Godfather of Ryleigh.”

Boyd expressed her gratitude during the televised story.

“Him helping out my daughter, I felt like I could not just let him go. … He’s a part of my heart. Thank you, thank you so much.”

In a similar story that occurred in Palmdale, California, a video surveillance camera recorded a Los Angeles County sheriff’s deputy saving an unresponsive baby from choking during a Black Lives Matter protest.

The 11-month-old boy’s mother and another woman were attending the protest on May 31 in Palmdale, California, when the baby became despondent, lost consciousness and stopped breathing, according to the Los Angeles County Sheriff’s Department.

The women ran across a supermarket parking lot to a group of sheriff’s deputies who were monitoring the protest from across the street, reported NBC News.

In the video, Deputy Cameron Kinsey runs toward the women when he realized they were in distress. The mother handed the limp child to Kinsey and after assessing the baby, the sheriff’s department said he “administered a mouth sweep with his finger and dislodged vomit.”

The baby began to breathe again to the relief of everyone there.

“None of that other stuff matters,” Kinsey said about everything taking place at the time. “Just the baby.”

Paramedics arrived and took the child to a nearby hospital where it was determined the boy had swallowed a coin, which had lodged in his throat and blocked his airway, according to WLKY. Kinsey’s finger sweep turned the coin sideways so the child was able to breathe again, the department said.

“Mom did the right thing,” Kinsey told the Antelope Valley Press. “She was quick-thinking and started patting him on the back to dislodge whatever he had stuck in there. I saw that. I saw she was scared and kind of frantic, so I ran over and I grabbed the baby. At that point, training just took over.”