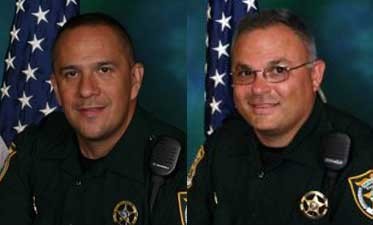 NICEVILLE, Fla. Two deputies from a troubled sheriff's office in Florida had no warning a confrontation with a National Guard soldier accused of beating his wife would turn deadly, the sheriff said.

Deputies Burt Lopez and Warren "Skip" York used a stun gun to subdue Joshua Cartwright, but he was able to start shooting at them from the ground. Both Lopez and York died.

"Within seconds he sat up and began firing a weapon that came out of nowhere, it was somewhere on his body we assume," Okaloosa County's Interim Sheriff Ed Spooner told more than 300 sheriff's office employees who gathered Sunday night to pray and hear an explanation of the shootings.

Cartwright was killed in a shootout at a roadblock after a car chase into a neighboring county. The deputies had gone to a shooting range to arrest him after his wife sought treatment for domestic abuse injures at an area hospital.

Spooner said the deputies had no information to make them think Cartwright would turn his weapons on them.

"This went from zero to 100 in a matter of minutes. In three minutes it turned from a passive discussion to a shooting, it was one heck of a mess," the sheriff said.

Spooner was appointed to take over the department in Florida's panhandle by Gov. Charlie Crist just eight weeks ago after the previous sheriff was arrested by FBI agents on corruption charges.

Both Lopez and York had retired from careers with the Air Force at nearby Eglin Air Force Base when they joined the department.

"He was the person you would want in a confrontation because he calmed people down," he said.

Spooner said Lopez and York stopped Cartwright near his truck as he left the shooting range and tried to arrest him.

Both deputies were shot in areas not protected by their bulletproof vests, Spooner said.

In the chase that followed, Cartwright's truck flipped on its side after spikes at a roadblock punctured the tires. The soldier came out shooting, Spooner said.

Investigators say Cartwright and deputies at the roadblock exchanged about 60 rounds in 30 to 40 seconds before he was killed.

Investigators said Cartwright was not a war veteran, but Spooner said the Florida National Guard soldier was interested in militia movements and weapons training.

In November, authorities arrested him for domestic battery, and that charge was pending.

Neighbor Aaron Walp worked as a bartender at a Fort Walton Beach bar where Cartwright was a bouncer two years ago. He said Cartwright's brooding ways made fellow employees uncomfortable, and he carried a flashlight with a sharp attachment that he threatened to use on customers who got out of line.

"He had a violent side," Walp said.

Destiny Harder, who lived next door to the Cartwrights at the Fort Walton Beach apartment complex, said she was often disturbed by their loud arguments and had banged on the wall between the two apartments Saturday morning after she was awakened by their fighting.

Meanwhile, the sheriff's office was trying to come to terms with the deaths, the second and third there in less than a year. Deputy Anthony Forgione died in July after he was shot by a suicidal man who had barricaded himself in a home.

In another blow, Sheriff Charles Morris was arrested in February by FBI agents while on a gambling trip to Las Vegas. He and his former office manager, Teresa Adams, were indicted by a federal grand jury on Thursday on theft, money laundering and conspiracy charges.

Larry Carter, the department's senior chaplain, said employees had been preparing a May memorial service for Forgione and trying to put Morris' arrest behind them.

"All the things that keep happening, it's like a scab that keeps getting peeled back over and over," he said.