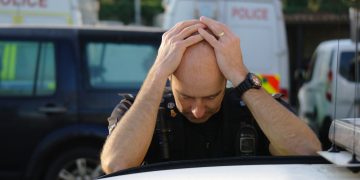 There is a Suicide Epidemic in Law Enforcement

After so long on the job, police officers tend to lose themselves to it. It is never something they intend to do and it sure doesn’t feel like something they have control of either. It is something that seems to be inevitable and it is the reason why we have a suicide epidemic in law enforcement.

According to Blue Help, in March 2020, there were 34 police officers who had taken their own lives.

In 2019 we lost more officers to suicide than to deaths in the line of duty. With that likely under reported total, there is a definite problem going on but the question that is on everyone’s mind is what exactly is the problem and how do we solve it?

Police officers are their communities’ sheepdogs.

They protect the public from chaos, crime and most importantly the wolves (predators). Officers must not only be the sheepdog while on duty but they must be off duty in order to protect themselves and their families as well.

Relaxation is never an option for a sheepdog like it is for the rest of the public. An officer must learn how to survive in between two worlds; on duty and off. It may sound to you like this is extreme but think back to the many situations over the last few years where officers would be ambushed. From breakfast at a Waffle House or by simply sitting in their patrol cars, officers are at continuous risk.

The public also does not hear about the countless situations in which members of the public know where an officer lives and will go to their house for various reasons while the officer is either off duty or away from their house.

Officers live in a glass house for everyone to see and they get no reprieve.

They go to the job and want to do their best work. They put their best foot forward and work harder at this than they have ever worked at anything before. They find satisfaction in solving crimes, cleaning up the streets and putting criminals behind bars.

This is all well and good until they end up in Internal Affairs for an allegation where they were accused of doing something wrong. Sometimes it doesn’t matter whether the officer did everything right or not, they know they could end up with harsh consequences.

So the officer that once couldn’t wait to get to work now dreads going to work for fear of getting jammed up over something they did not do.

This is when the cycle begins.

The officer is afraid to do their job, they are now soured and the happiness and joy that once was inside the officer for having the opportunity to serve their community is gone.

The bitterness and lack of motivation is a weight that some not only were not prepared for but they simply can’t handle.

This cycle is common and it doesn’t stop there.

Situations like those are just the first of many where officers feel unsupported and are afraid to do their job for fear of severe consequences.

As this continues to happen throughout this officer’s career, they also see the same phenomenon in those they work with.  The environment at the police department turns toxic because every officer who has more than a few years on, feels the exact same way.

These officers have lost their faith in their department, their administration and in the job itself. The only job they could ever imagine themselves doing and the one they spent years working towards has been shattered.

The love for the job is gone. The passion is gone and life has turned out to be something that no rookie could have ever imagined.

This is where the cycle gets dangerous.

This downward spiral can happen quickly. The job isn’t what they thought but the idea of never wearing a uniform again literally kills them from the inside and out.

And they are miserable.

This disappointment often bleeds in to their personal lives.

They no longer see any good in anyone or anything; including themselves.

They feel like they are worthless after all the run-ins with their supervisors and admin and they begin to really believe it.

They believe they are nothing more than just a cop and are worthless because of the situations they have been in.

When a person truly believes they are worthless and gives up hope for a better life, the tragedy has just begun.

This is when people take their lives.

I would like to give you three specific steps to avoid what thousands of cops are currently facing.

There must be something done to help officers not to succumb to these circumstances.

Officers cannot lose themselves to the job, after all, it is just a job.

Autumn Clifford is a Police Officer, Life Coach, Criminal Justice Professor and host of the Changing the Culture podcast

Autumn Clifford is a police officer from Maine who was injured in the line of duty and no longer works full time. She is now employed part time as a police officer while she runs her coaching business, which focuses on helping first responders with emotional, spiritual and mental wellness. Autumn is also a part time criminal justice college instructor, police wife and the founder and host of the Changing the Culture Podcast. www.thesheepdognation.com. Autumn can be found on instagram @officerautumn or on her website www.autumnclifford.com.