'I'm not sure my adrenaline has settled down yet' 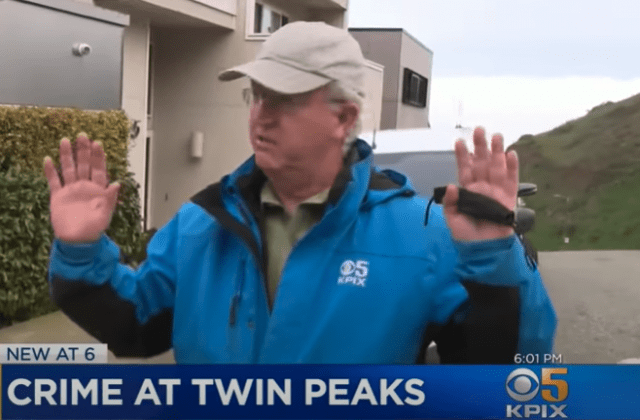 Reporter Don Ford describes his experience of being the victim of an armed robbery. (KPIX YouTube)

SAN FRANCISCO — A reporter for a local news station in San Francisco was robbed at gun point last week while filming a television segment on crime taking place inside the city. The segment came in response to residents complaining that vehicle burglaries have been increasing near a city landmark ever since the early days of the pandemic when local officials closed the road that was used to access the area’s vista point.

“On Wednesday afternoon, the smash-and-grabs turned into armed robbery,” CBS San Francisco reported. “KPIX 5 reporter Don Ford was on the story Tuesday and again on Wednesday, and was preparing to interview nearby homeowners when a white luxury sedan with four men inside pulled up.”

Ford said that the men put a firearm in his face and demanded the camera — the whole encounter reportedly lasted under a minute, Daily Wire reported.

“The car came up here while we were about to do an interview, three guys jumped out. One had a gun and put in my face and said, ‘We’re taking the camera,’” Ford said. “My whole thought at the moment was, ‘Be calm.’ Let’s not get this guy excited. He’s got the gun. I don’t. So you take you the camera. It’s yours, buddy.”

Another KPIX reporter described the anxiety of the moment since “everyone was shaken,” although no one was injured.

“I’m not sure my adrenaline has settled down yet,” Ford said.

“Earlier this afternoon a reporter was robbed at gunpoint at Twin Peaks Blvd & Burnett Ave while interviewing a resident about car break-ins in the area. @SFPD officers are working to find those responsible and recover the camera. This incident is ridiculous & unacceptable but not entirely unexpected in San Francisco in 2021,” Mandelman said. “We need to adequately resource public safety agencies, adopt better strategies to stop repeat offenders & make clear that San Francisco is not a place that you can commit crimes & put people’s lives at risk with impunity.”

but not entirely unexpected in San Francisco in 2021. We need to adequately resource public safety agencies, adopt better strategies to stop repeat offenders & make clear that San Francisco is not a place that you can commit crimes & put people's lives at risk with impunity. 2/2

The San Francisco Metropolitan Transportation Authority (SFMTA), the agency that closed the road that residents say is leading to the increase in car break-ins, also responded to the incident in a statement, according to the Daily Wire.

“We are saddened to hear about what happened to reporter, Don Ford, while covering the story today,” SFMTA said. “In an attempt to address these concerns, the south end gate at Portola Drive was opened in September daily between 6:00 p.m. and midnight to provide local access to the top of the peaks for people driving. However, some unresolved issues remain, so the SFMTA worked with the community and other city departments including Rec and Park, SFPD and Public Works on new ideas to ensure access and balance needs at Twin Peaks.”

Police say that the camera was later recovered because it had a tracking chip in it, but they did not release additional details.