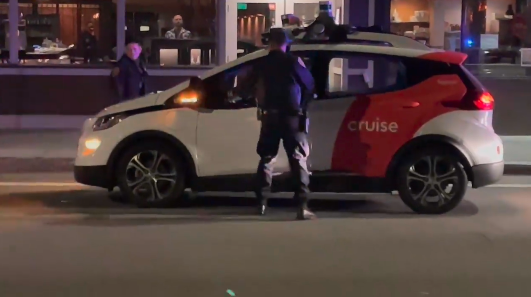 Officers in San Francisco stopped a vehicle with no driver or occupants. (Instagram)

SAN FRANCISCO – San Francisco police officers appeared baffled when stopping a vehicle that had no driver or occupants, according to a report.

So what should officers do in this situation? Has this new reality been covered in training? Those are the questions that come to mind while viewing an Instagram video of San Francisco police officers stopping a driverless vehicle owned by the ride-hailing service Cruise, the Washington Examiner reported.

“Ain’t nobody in it!” a voice says while an officer attempts to approach the driverless vehicle in the video. Three officers eventually exit the patrol unit as they discuss the quandary.

After the vehicle initially yielded, it then moved away from the police unit, apparently doing so in an effort to avoid blocking a lane.

“Our AV yielded to the police vehicle, then pulled over to the nearest safe location for the traffic stop, as intended,” Cruise said in a tweet responding to a Saturday clip of the initial exchange. “An officer contacted Cruise personnel, and no citation was issued.”

Chiming in with more details: our AV yielded to the police vehicle, then pulled over to the nearest safe location for the traffic stop, as intended. An officer contacted Cruise personnel and no citation was issued.

The self-driving automobile service said in a Tweet that employees actively work with SFPD to handle incidents such as this one, including having a “dedicated phone number.”

We work closely with the SFPD on how to interact with our vehicles, including a dedicated phone number for them to call in situations like this.

According to the Examiner, Cruise is a General Motors-backed driverless car service that provides transportation in autonomous vehicles throughout the San Francisco area.

The company began dispatching driverless vehicles to select users in November 2021 and began offering free rides to the public in February 2022.