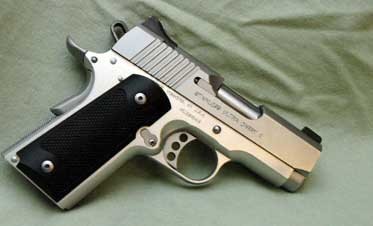 As a shooter entering the police service in the early 1970s, I had been indoctrinated to fear the John Browning-designed Colt Government Model (or 1911, depending on your frame of reference). Cocked and locked carry how hazardous! It was only after the introduction of the Glock Safety Action that I came to realize the 1911 action was not that dissimilar. As with any handgun, safe carry is dependent on the shooter being properly trained in the firearm's manual of arms. For almost 100 years, officers in Texas, New Mexico, and Arizona have routinely carried Government models; federal agents with a variety of agencies carried Government models in the 1920s and 1930s, some of the most violent years for federal investigators. Today, we see the 1911 action becoming more and more popular among such professionals as LAPD's SWAT and SIS, FBI SWAT and HRT, and the U.S. Marine Corps' Special Operations Command. Indeed, many manufacturers, to include names such as Smith and Wesson, Taurus, and Sig Sauer, produce 1911-based pistols in a wide variety of models.

Kimber has been among the most highly respected makers of 1911 variants for many years, having been chosen by LAPD and the Marines to manufacture their modern .45 variants. Kimber also maintains a wide range of 1911-based models. Among these is their excellent concealed carry pistol, the Stainless Ultra Carry II /.45.

The UCS is a 3-inch barreled pistol, based on the shortened frame size often referred to as the Officer's Model. This frame uses a shorter slide and barrel, plus a shortened grip. This limits the magazine to 6 rounds, although any other 1911-style magazine may be used with it.

Unlike the original Colt, Kimber uses a two-piece recoil spring guide with a bushingless barrel. Some love this type system, others hate it. I find both work well and have been dependable. Takedown has a difference: rather than turning the bushing to unlock the recoil spring guide cap and then proceed with takedown, with the two-part rod one eases the slide back to reveal a small hole near the end of the recoil guide, into which one then inserts either an included pin or a bent paper clip. You then proceed to disassemble the pistol.

There are many 1911 clones on the market, from full-sized Government to Commander to Officer configurations, in a wide variety of prices. The UCS' name speaks to its intent ultra concealed. This is not a race gun designed for competition. It is designed for concealed carry. It sports a fixed rear sight of high enough profile to permit useful acquisition, but designed for ease of carry. It is fit to a dovetail with a hex-screw lock, permitting windage adjustment. The front sight is a low partridge type. Although a squarish design, when used with a quality holster it is not a draw impediment, and mates well with the rear sight in use. Both are serrated, to lessen reflections and aid sight acquisition.

The UCS also sports an extended safety, making its manipulation surer, an important consideration for a carry gun. A notch at the rear of the chamber acts as a loaded chamber indicator, permitting a visual check of the chamber without having to perform a slide check. The hammer is a skeletonized design, lessening the weight. Similarly, the trigger sports the three-hole design often found, again reducing weight. Standard with a synthetic double-diamond design grip, Kimber offered upgrade grips of rosewood when I acquired mine. After several years of carry, and the damage that brings to pretty wood, I have replaced them with black, checkered pattern Alumagrips.

The UCS sports a "beavertail" style grip safety. On the shortened frame, this is a valuable asset to prevent pinching the web of the hand between the slide and frame during recoil. The mainspring housing is flat and wears a well-cut, very fine checkered pattern. The front of the grip is plain; lack of front serrations or checkering is not a noticeable difference to me.

I recently took my UCS to the Martin County Sheriff's Office range. Deputy William J. "BJ" Brown, a member of the SO's Marine Enforcement Unit, was on the range that morning, and joined me in test firing. BJ is also a Kimber fan, and has a UCS of his own. Ammunition consisted of CCI Lawman 230 grain TMJ and CCI Gold Dot 230 grain JHP ammunition, at relevant range for the type of carry five and seven yards. Deputy Brown commented that the Kimber is a more natural shooter for him than his issue pistol, which consistently groups slightly low and left. With the Kimber, aim is natural.

We both shot well with the little powerhouse (albeit, BJ firing tighter groups than me). As would be expected, there were no malfunctions during the shooting. A variety of magazines from Kimber and other manufacturers were used, with all performing well. The controls safety, slide release, and magazine release function smoothly during shooting sessions.

Some may consider the .45 ACP in a small frame to be too powerful to carry comfortably. As big as I am, I am recoil-sensitive. However, I have found the .45 ACP to combine energy delivery through a large bullet with a lower velocity, meaning less apparent recoil. Whether this Kimber, or even a Glock 30, the nature of the recoil is, for me, very manageable. It's much more so than the .40 S&W, which combines a somewhat larger bullet with greater velocity, and a firing impulse which I find difficult to adjust to while shooting.

Of course, nothing is perfect for everyone. BJ and I have both encountered a problem while carrying our guns the safety swipes off too easily. Carried in a quality holster, this is not a crucial problem. But in some holsters, where the trigger may be left exposed, this could become a safety issue.

My normal carry is in a left handed inside-the-belt holster, worn on the right (strong) side, in the old cavalry-style twist draw. I find this a much more concealable method. The large, well-checkered magazine release of the UCS, usually considered a benefit, is very easily bumped and released in this wear (also a problem for left handed carriers), resulting in the magazine usually hanging a quarter inch out of the well. Although I have learned to tap upon draw, this is a potential problem in carry.

My other complaint may have been rectified already in design, but I have been unable to determine this for sure. My sights are all black no outline, no dot system, just black rear and black front sights. Kimber's web photos all show it equipped with night sights, a three-dot system. The problem is easily rectified with any of a variety of methods, from adding a dot of paint to the sights or by upgrading the sights.

My misgivings are minor, and easily rectified. The Kimber Stainless Ultra Carry II /.45 is a well-designed pistol for the individual needing a concealable, yet powerful pistol. While as a class, all semi-autos are more concealable than revolvers, the shorter grip of this model makes concealment even easier, yet is sufficient for good control in the hand. In Condition One, cocked and locked with a round in the chamber, it provides seven rounds of a proven stopping caliber that is not an over-penetrator. Its features are designed for carry. In today's market of overly expensive handguns, at a suggested retail of under $1000, and often found for under $800, it is a quality, dependable tool, one which I find to be a good companion.