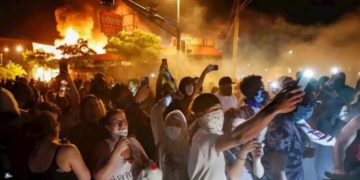 An overview to prepare for the first Presidential debate

Presidential candidates Joe Biden and Donald Trump will debate for the first time. One of the six topics is protests, crime and violence in cities.

Are violent protestors and their tactics creating a backlash? Many believe that protests are tied to increasing violent crime.

How Americans think about crime and protests has implications for political campaigns this fall.

The presential election. The Coronavirus. Wildfires. A damaged economy. There are endless topics that people pay attention to but, per Pew (see below), it’s the protests and related crime issues that get the attention of most people.

Like so many topics, it’s difficult to ascertain precisely what this means.

The focus on protests and crime has implications for citizen safety and elections. Considering the decrease in support for BLM and Gallup polls showing overwhelming support for law enforcement based on personal encounters (link below), public opinion could be changing.

Some quotes below are rearranged for brevity.

It’s impossible to escape the videos showing up in social media feeds of protestors being violent or outrageously confrontational or threatening bystanders, plus rioting or burning buildings. There are also multiple videos unrelated to protests showing unprovoked attacks on innocent people, including the elderly.

Most people are repulsed by what they are seeing. These videos are rarely being offered by mainstream media. This may be the first time where social media is “the” driving force of public opinion.

For a presidential candidate clinging to a law and order platform, Mr. Trump may be benefiting. This view is held by Democrats and those involved in protests. Some within the movement insist that violence is propelling Trump into a second term.

Per the Marshall Project, The Trump campaign spent more than $6 million on campaign ads on Facebook focusing on crime and policing, almost all of it after the killing of George Floyd in Minneapolis in May. The Biden campaign, by contrast, spent almost no money on Facebook ads focusing on police and criminal justice issues until late August, after the president tried to link Biden the protests.

The vandalism and looting following the death of George Floyd will cost the insurance industry more than any other violent demonstrations in recent history per Axios.

The protests that took place in 140 U.S. cities this spring were mostly peaceful, but the arson, vandalism and looting that did occur will result in at least $1 billion to $2 billion of paid insurance claims — eclipsing the record set in Los Angeles in 1992 after the acquittal of the police officers who brutalized Rodney King, Insurance Losses.

It’s difficult to separate violence during protests with reports of dramatically rising violent crime in cities after protests. There is no one article fully documenting the rise in urban violent crime but news reports suggest that the cities where protests and or riots have occurred are being hit the hardest, Governing.Com.

There are growing homicides and aggravated assaults in 2020 per the FBI-Preliminary Report. Per Gallup, violent crime has tripled. Two additional sources show increases in violent crime, Crime in The US.

There are multiple reports of people and businesses leaving cities, partially due to crime concerns, People Leaving Cities.

Are Violent Or Confrontational Protests Counterproductive?

Racial justice activists convulsed the nation this summer with protests against police brutality. They don’t have much to show for it in terms of major policy change, Politico reports. Congress and most state legislatures have taken no action.

“Though employed by a small fraction of protesters, experts warned the aggressive tactics could erode support for a just cause while fueling the narrative of the country falling to “mob rule,” WJLA-DC. Note, I’m quoted in the article.

Some suggest that the movement is receding when participants realize protesting has limits for meaningful change, The Guardian.

There no central database documenting attacks on police officers during protests. Per the Associated Press:

A man walks up to a squad car and opens fire on two sheriff’s deputies sitting inside. Two police officers are shot after responding to sounds of gunfire during a protest.

The shootings — one in Los Angeles and the other 2000 miles (3,200 kilometers) away in Louisville, Kentucky, less than two weeks later — are stark reminders of the dangers law enforcement officers face at a time when anger toward them in the wake of police killings of Black Americans, such as George Floyd and Breonna Taylor, has boiled over.

According to the Chicago police department there, 66 officers have been shot at thus far this year, compared to 17 at this point last year. Ten were struck by the bullets and wounded. Last year at this time, three officers had been hit.

Since May 28th, 2020, our officers have been shot at, stabbed, assaulted with rocks, bricks and other debris, have been struck by vehicles and have even had Molotov cocktails (thrown) at them and inside their vehicles,” Sgt. Jessica McRorie, a spokesperson for the New York Police Department, said. In all, 472 officers suffered some form of injury during the protests, she said, Associated Press.

American law enforcement has always been highly rated and does much better than most institutions, including the media and Congress. Yes, there have been recent decreases in confidence because of use of force issues. Yes, there are differences based on race, politics, and a variety of factors.

A host of major news stories have been competing for Americans’ attention in recent weeks. But the public is more likely to have heard “a lot” about ongoing confrontations between police and protesters than several other stories, according to a Pew Research Center survey conducted Aug. 31 to Sept. 7.

The survey of 9,220 adults was conducted as part of the Center’s American News Pathways project.

The survey asked separate questions about whether the public has heard about “ongoing confrontations between law enforcement and protesters in cities around the country” and the amount of attention news organizations have paid to “protests over racial inequality and other issues.” It’s important to note that many recent protests related to racial inequality have not involved confrontations with law enforcement.

While the vast majority of Americans have heard at least “a little” about recent confrontations between police and protesters in some U.S. cities – 96% of adults say this – the public is divided over whether recent protests related to racial inequality have received the right amount of attention or not.

Like all polls, opinions are divided along racial, ethnic, age, and political lines.

Per Pew-Support For The Movement Declining

In a separate Pew Research Center survey fielded Sept. 8 to 13, a little over half of Americans (55%) say they strongly or somewhat support the Black Lives Matter movement, which has played a key role in the recent protests over racial inequality.

Support for the movement has declined by 12 percentage points since June, shortly after the death of George Floyd sparked national and international protests.

For those old enough to experience the protests of the 1960s and 1970s, they drove policy and created a populace sympathetic to ending the war in Vietnam and gave support to racial, sexual preference, and sexual equality movements.

I don’t think that’s what’s happening now. Based on data, protestors may be derailing their goals.

It’s up to law enforcement to retain their professionalism in the face of adversity. After watching endless videos of police officers being verbally assaulted in the most vulgar and profane ways, and the physical attacks and shootings of officers, I believe that the average American, regardless as to who they are, are appalled. Note that polls show vastly declining numbers supporting efforts to defund the police.

Peaceful protests are an inherent and Constitutionally protected right that needs to be honored and protected. Cops are accountable, there’s no denying that. Every police officer understands this.

We within the justice system have moments we regret. African Americans have a tragic history, some involving obvious police brutality. Some of the current negative publicity regarding cops is deserved. Polls show that most Americans expressed support for the movement. We must come together and find solutions.

But everyone has their limits; most Americans have probably reached theirs. Shootings and injuring hundreds of police officers, destroying businesses and economies (it takes decades for cities to bounce back after riots), endless arsons, increasing fear, increasing crime, and people and businesses moving creates an inevitable pushback.

African Americans are questioning the participation and tactics of white protestors, New York Times. There are articles questioning the overly confrontation nature of protestors. “How Reckless White Allies Could Lead To The Reelection of Trump,” is one example, Washington Post. Many in the Black community believe that Whites are wrongly dominating the movement often with tactics that hurt their cause.

But as to American perceptions, the backgrounds of protestors doesn’t matter if the strategies backfire.

Most Americans are taking the protests and rising violent crime very seriously; they believe that they, their families, and their communities could be at risk.

Americans need to support legitimate protests and goals, but quite frankly, violence, attacks on police officers, massive property damage to businesses, riots and repulsive behaviors are undermining change.  The reaction to violent protests could elect a president.