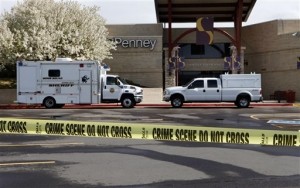 LITTLETON, Colo. — Authorities couldn't help seeing similarities to the Columbine High School shooting after a fire forced the evacuation of a mall just two miles from the campus.

Just like Columbine, an unexploded pipe bomb and propane tanks were discovered Wednesday at Southwest Plaza Mall in Littleton.

In addition, the blaze coincided with the 12th anniversary of the deadly shooting that left 12 students and one teacher dead.

"We're concerned about the date, the time, things of that nature, but we don't have anything solid that would indicate any link at all other than, certainly, circumstances," Jefferson County Sheriff Ted Mink said Thursday.

No arrests have been made, but dozens of law enforcement agents were scouring security video and following other leads to identify a man seen entering the mall through a side door not normally used by the public.

No one was injured at the mall and the bomb didn't explode. The mall reopened Thursday. Security guards were on patrol but it seemed like a normal shopping day.

"It doesn't make sense, but of course it wouldn't make sense if it was the work of a crazy person," Cheryl Jenkinson said as she picnicked with her family near the Columbine campus in a park that's the site of a memorial to the people killed in the 1999 shooting.

The shopping mall can be seen from the memorial that stands atop a hill.

"I'm going shopping there," Jenkinson said of the mall. "I came here for what Littleton has to offer, not Columbine."

Mink said the community shouldn't feel threatened by the incident at the mall, hinting that progress was being made in the investigation.

"It isn't a situation where we don't have a good handle of the direction where we're going," he said, declining to elaborate.

The two propane tanks found at Southwest Plaza Mall were discovered in a hallway of the food court after the fire was reported around 11:50 a.m. Wednesday.

The Columbine shootings started at 11:19 a.m. and ended at 12:08 p.m. on April 20, 1999, with the suicides of the two teenage gunmen. Unexploded pipe bombs and propane tanks with explosives attached were found in the school cafeteria after the shooting.

Through the years, students across the country have been accused of threats and incidents modeled after Columbine.

"The kind of crime like Columbine will motivate a certain segment of the population to attempt the same type of crime," said Brian Rohrbough, whose son Daniel was killed at Columbine. "Whether they're doing it because they're purely evil or in addition to being evil, they just want attention, I don't know."

Rohrbough said he drove by the mall Wednesday on his way to the Columbine memorial and saw emergency vehicles. He said he prayed the situation wasn't related to Columbine.

Investigators were trying to find the man seen on videotape entering a stairwell through the side door and on an escalator in the mall.

Authorities also were investigating the cause of the fire, including whether it was sparked by failed detonation of the bomb, West Metro Fire Rescue spokeswoman Cindy Matthews said.

Despite authorities' assurances about safety, the community seemed uneasy.

Students at an elementary school in Littleton were evacuated to another school Thursday after a man entered the building to use a restroom.

Schools also were locked down following the fire at the mall on Wednesday and alerts were sent to malls in the Denver area.