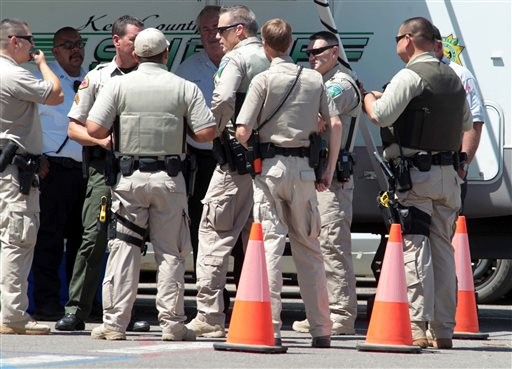 LOS ANGELES (AP) — Authorities searching for a man linked to a killing, a kidnapping and the wounding of two sheriff's deputies focused on a rugged, 5-square-mile area of central California.

Dozens of deputies and helicopters combed the high-desert area 30 miles from Bakersfield early Tuesday. Authorities believe the man is on foot and have warned residents were warned to stay inside and lock their doors and windows, Kern County sheriff's spokesman Ray Pruitt said. Two elementary schools and a middle school have been closed indefinitely.

"We're having to move very slowly and meticulously," Pruitt said. "This is a suspect we consider to be armed and very dangerous. He has shown he is not hesitant to engage law enforcement officers in a shootout."

In this Sunday, Aug. 2, 2015 photo, a Ridgecrest Police vehicle drives on U.S. Highway 178 near Weldon, Calif. Authorities searched an area east of Bakersfield, Calif., on Monday, Aug. 3, as part of a six-day manhunt involving the wounding of two deputies. (Casey Christie/The Bakersfield Californian via AP)

However, investigators haven't confirmed the crimes were committed by the same man, he said.

The manhunt began July 28 after three young men approached a squatter in a remote cabin. The squatter asked the two 20-year-olds and a 19-year-old from Bakersfield why they were on his property.

When one of the men said it was his cabin, the squatter pulled a shotgun and ordered them inside, holding them for more than an hour and threatening to kill them.

The trio escaped and hiked several miles to a road.

This undated composite sketch provided by the Kern County Sheriff's Office shows the suspect involved in the wounding of police officers in the Kelso Valley, Calif., area on Tuesday, July 28, 2015. Authorities on Monday, Aug. 3, searched an area east of Bakersfield, Calif., as part of a six-day manhunt involving the wounding of the deputies. (Kern County Sheriff's Office via AP)

Meanwhile, the suspect left in their car, which was found abandoned 2 miles away on Wednesday. Several firearms stolen from the men and the cabin also were found, but not the shotgun.

The next day, David Louis Markiewitz's worried family found the 64-year-old shot to death in his cabin about 10 miles from the first dwelling.

Pruitt didn't know what type of weapon was used to kill him.

"It appears he's been breaking into homes in the area that are unoccupied and gaining access to firearms," Pruitt said of the fugitive.

In this Sunday, Aug. 2, 2015 photo, a Los Angeles County Sheriff's helicopter flies near Weldon, Calif. Authorities searched an area east of Bakersfield, Calif., on Monday, Aug. 3, as part of a six-day manhunt involving the wounding of the deputies. (Casey Christie/The Bakersfield Californian via AP)

A man with a high-caliber handgun confronted SWAT teams entering a mobile home during their search Saturday, Pruitt said.

The deputies returned fire, and Deputy Michael Booker was shot twice — once in each arm — and airlifted to a hospital with severe injuries, Pruitt said. He remained hospitalized in stable condition.

Senior Deputy Jose Perez was treated for a minor wound to his right ear.

Authorities described the fugitive as a white man in his early 30s, 5 feet 8 inches tall and 160 pounds, with long brown hair, blue eyes and wearing an olive-colored T-shirt, olive-colored pants, a brown corduroy hat and a green bandanna.

The Los Angeles County Sheriff's Department has sent SWAT deputies and vehicles to aid the search.