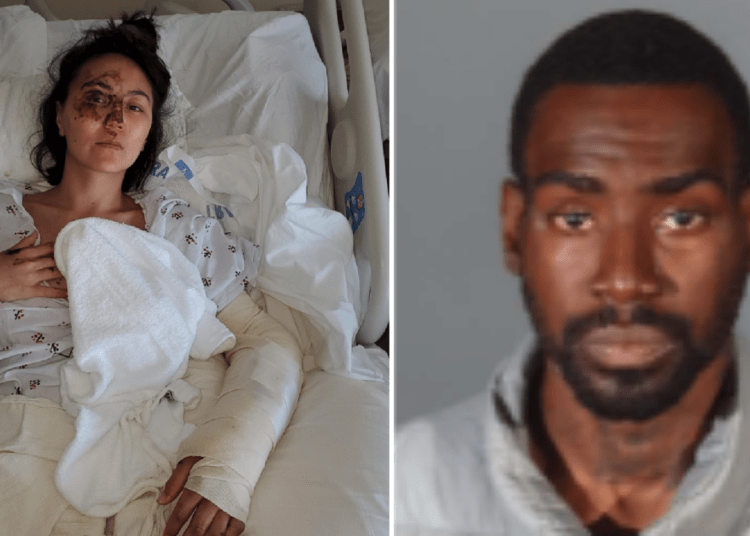 Los Angeles police released photos of a woman in her hospital bed after being severely injured during a hit-and-run collision by a suspect fleeing in a stolen truck. Tajon Wright Freeman was charged with the crime. (LAPD)

LOS ANGELES – A suspect fleeing in a stolen truck and accused of severely injuring a woman in the process has been taken into custody, police said Monday.

The perpetrator was identified as Tajon Wright Freeman. He was located and arrested in Phoenix last month on warrants, according to the Los Angeles Police Department.

The hit-and-run of a pedestrian occurred Feb. 20, 2021, after the man stole an older model Toyota Tundra from the area of Seventh and Figueroa streets and was fleeing the crime scene when the crash occurred, police said.

The woman who was severely injured by the fleeing felon was crossing the street at an intersection when she was run over, KTLA reported.

LAPD said the suspect continued driving without rendering aid to the badly injured victim. He later abandoned the stolen truck a short distance away as the woman was rushed to a hospital with severe injuries.

Police shared photos last September of the victim in her hospital bed, where she was lying with a broken arm and horrendous injuries to her face. Although she was discharged from the hospital, the woman continues to face a long road to recovery.

DNA evidence collected from the stolen truck led detectives to Freeman, which prompted two felony warrants for his arrest, according to KTLA.

It appears that Freeman has been in the Phoenix area since July 2021, police said. Hence, he will be extradited back to Los Angeles, where he faces charges of grand theft auto, felony hit-and-run and felony vandalism.