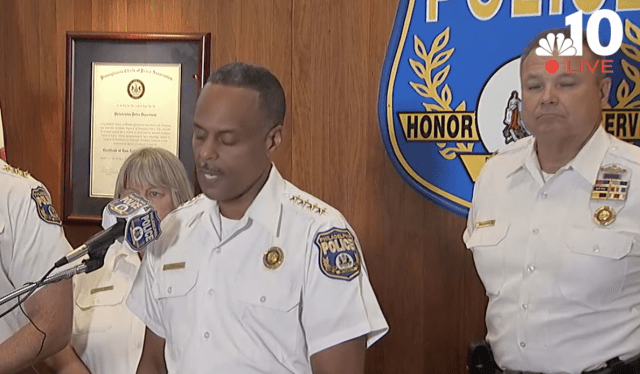 PHILADELPHIA – The Philadelphia Police Department plans to fire 13 cops after it launched an investigation last month into racist and violent comments posted by officers on social media.

Richard Ross, the city’s police commissioner, said in a news conference Thursday that another four officers would receive 30-day suspensions before returning to service, and a range of less harsh punishments would be dished to other officers, aol.com reported.

“I continue to be very angered and disappointed by these posts, many of which in my view violate the basic tenants of human decency,” Ross told reporters. “And I am saddened by the fact that there are even some who would attempt to justify such hate and vile behavior.”

When the investigation launched a month ago, the department placed 72 officers on desk duty. The city’s top cop said all but three of those taken off the street would face some form of discipline, such as five-day suspensions, according to the report.

Ross said the police agency had to consider free speech rights when determining punishments. He did not name the officers who will be terminated.

The police department opened the investigation after the Plain View Project revealed Facebook posts from more than 300 Philadelphia officers that researchers believed could harm trust in local law enforcement.

One officer posted a picture of the Confederate flag, according to a screenshot captured in the project’s database. Another posted a meme that said, “Death To Islam.” Numerous posts in the database described black men as “animals.”

Lawyer Emily Baker-White launched the Plain View project in 2017, and it went live at the beginning of June. When the department launched its investigation, Baker-White told the Daily News she was “encouraged” by the response of Ross and other public officials to the project.

The investigation was conducted with the law firm Ballard Spahr. However, Ross said it is not yet completed. He said the department will continue to investigate “far less egregious” posts from officers who did not receive suspensions.

Moreover, Ross also said the department would initiate sensitivity training for officers and continue to attempt to repair trust with the community.

“We’re aware of the dismissals and disappointed that our officers will be terminated without due process,” said Philadelphia Fraternal Order of Police Lodge #5 President John McNesby, according to CNN.

The Plain View Project also cataloged posts from seven other areas, including St. Louis and Dallas.

In St. Louis, the city’s top chief prosecutor added 22 cops to a list of officers her office won’t take cases from, and the police department launched an investigation. A police union there asked its members to post a Punisher symbol in solidarity with officers under investigation.

Ross said he understood why the posts from officers in his force sparked dismay across the Philadelphia community. He described the posts as a “black eye” on the department.

“We will work tirelessly to make this situation better,” Ross said. “We know it will take a tremendous amount of effort.”