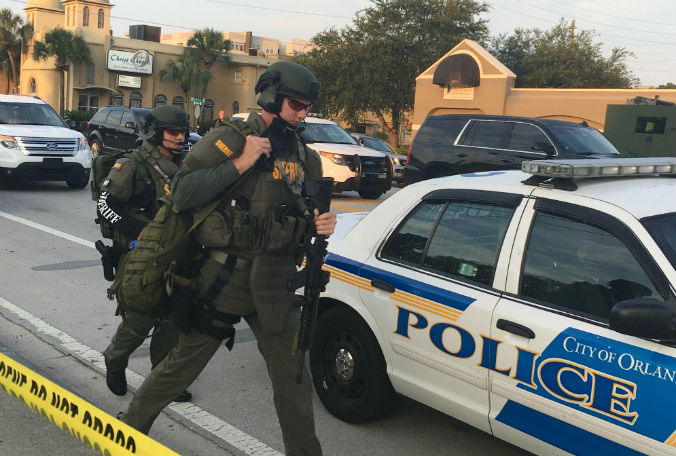 The most dangerous thing law enforcement officers do is enter a house or a building during priority calls for service.  There are too many known unknowns and variables for the responding officer or officers to control.  The danger is multiplied exponentially during law enforcement tactical operations, when tactical officers are asked to enter into houses or buildings to look for armed individuals and secure suspects and the structure. The dangers can only be mitigated or reduced by sound tactics, teamwork, and precise marksmanship.  There are a lot of cliches in the law enforcement tactical community.  I have heard them all.  “Speed, surprise, violence of action,” or “Train like you fight,” are just two examples.  I am sure you have heard the cliches many times before like me.  I hate them all.   These cliches are worn out and often used by individuals trying to fill voids in their tactical acumen and expertise.  I have been fortunate enough to train with the world’s most elite law enforcement and military tactical units.  I have never once heard these cliches used among the operators in those units.   So when I heard criticisms online and during media interviews from various individuals, even those with strong ties to the law enforcement community (including former police officers), about the Orlando police tactical response during the Orlando Pulse nightclub shooting, I was appalled.  The criticisms reminded me of when I hear those cliches.  Here is why.

It has been said that the first reports from the battlefield are always wrong.  The same is true in police work.  Every cop has been dispatched to calls for service, only to get there to discover the call was not even remotely close to how it was dispatched.  It happens all the time. I just had one that went like this: “Unit…. respond for a middle eastern male, wearing all black, a mask covering his face, and carrying two large bags. He is looking suspicious at the bus stop on ….Street.”  As I drove to the call, I thought of the incident in Orlando and how it seemed the public was maybe on edge.  Another officer arrived before me.  He has been a cop longer, but we police almost the same way.  I have worked with him long enough to read his body language as I arrived.  As I got out of the police car, I recognized the suspicious male immediately.  It was homeless guy that had recently been appearing in my beat.  He is harmless.  But to someone that wasn’t a cop he could look suspicious.  He had been sick recently and he was using the mask to keep exhaust fumes from his lungs.  The black bags contained all of his belongings that he carries from place to place.

I have frequently bought this man lunch or passed him a few bucks so he could eat.  He works washing dishes, but he just cannot afford a place to stay.  The other officer and I asked if he needed something, and we asked if we could buy him lunch.  He declined.  We also offered him a ride somewhere.  He also declined.  We spoke with him a few minutes and sent him on his way.  But to the untrained, he could look like the next terrorist.

I don’t want to begin a discussion of profiling.  That topic deserves a separate venue.  Any detention, arrest or other police action based on race, gender, sexual orientation, national origin, or ethnicity is wrong.  Stated simply: it should not be tolerated.  Maybe someone profiled the homeless guy and called 9-1-1. I will never know.  But the point here is that sometimes humans observe situations and make incorrect conclusions about them.

The Orlando Police were dealing with human observations and subsequent conclusions on much larger scale during the attack.  Was there only one shooter?  Was the shooter male or female?  Did he/she escape the nightclub?  Are there any IEDs?  Where is the shooter or shooters now?  How many are injured?  Where are the injured?  This list of questions could go on and on.  The Orlando Police Command and Tactical Staff were required to answer these questions and answer them correctly.   They were relying on other humans that had been inside the club to provide them with the necessary information to provide correct answers.  And sometimes what humans see and how they describe it can be inaccurate.  The Orlando Police Command Staff had to sort through the mass flow of information based on human observations and determine what was accurate and what was not.

For the past several decades, police relied on 9-1-1 callers, walk-ins to a police station, and flag downs.  Not anymore.  The advent of the smartphone and social media has created an environment where police can receive minute by minute accounts of events as they unfold from witnesses, victims, and sometimes even suspects.  This information is great, but when you have dozens, or possibly hundreds, of people providing real-time updates on Twitter, Facebook, Instagram, or E911, it presents a problem: information overload.  Someone has to sort through the real time postings and updates, and then relay it to officers on scene.  During the Orlando attack, some of the social media postings were in Spanish, which presented an additional challenge to the Orlando Police.

Once, during a tactical leadership course I attended, the instructor had us do an exercise.  We were instructed to pair up in groups of three.  One person would stand in the middle, and the other two would stand close to the person,  beside them so they could speak into their ear.  The person in the middle was instructed to write down everything they hear.  The two people on each side were instructed to read aloud, at the same time, two different provided statements.  The results here were hysterical.  Even the readers had difficulty reading the entire passages.

There are many different points to be made from the exercise.   One key point, and one very applicable to the situation that the Orlando Police Command Staff likely faced, was:  information overload.   The human brain can only focus on one task at a time.  Successful multi-tasking is a fallacy, regardless, of what you hear from those in the business world and from authors.  If the person in the middle only focuses on the person on their right, the completely miss what the person on the left is saying and vice-versa.

So imagine being a member of the Orlando Police Command Staff.   Instead of having two people talking in each ear at the same time, imagine having 10-15 people in each ear all talking at the same time.  And oh, lets add in that there is a hostage situation, it is night, and people are yelling and screaming, and fleeing the scene, and lives are at stake.

Police work is inherently dangerous.  I get it.  It is something that comes with the job.  As police officers, we accept it when we raise our right hands at the academy graduation, and everyday that we put on a gun belt, vests, and grab a radio and mark on duty.

Our profession is also highly reflective.  We learn from our mistakes, and teach each other how things can be done safely.  The United States has the most decentralized form of policing in the world.   There are more than 12,000 police departments in the United States. Some of these departments are separated by thousands of miles, and obviously attend different police academies.  Yet, despite the differences, most officer safety tactics are the same.  The interview stance, hands above the waist while talking to someone, watch a suspect’s hands,  watch for verbal and physical cues that a suspect might attack, are all universally taught at police academies across the United States.   It is actually extraordinary to think about.  12,000 different police departments with almost the same officer safety standards.

How can these basics be almost universally taught at academies across the United States?  It is because sadly, officers have been injured or killed during calls for service, and we have learned from what happened, and if possible we have tried to prevent it from happening again.

There will be a time to dissect the Orlando Police Department’s response to the Pulse nightclub attack.  If mistakes were made, these mistakes were likely the result of human frailty and were not deliberate.  In the coming weeks and months, our governing bodies, the National Tactical Officers Association (NTOA), International Association of Chief’s of Police (IACP), and the Police Executive Research Forum (PERF), will most likely study the incident and the subsequent police response.  These institutions will issue reports.   There will no doubt be recommendations made on how things could have possibly be done better.  But that time is not now.

In the meantime, hats off to the Orlando Police Department, and all of the officers on the scene.   The Command Staff, tactical units and patrol officers performed heroically in a highly chaotic, fluid, and dangerous situation.   If anyone runs into any of these officers, please shake their hand for me.  I’ll buy those officers a beer anytime.