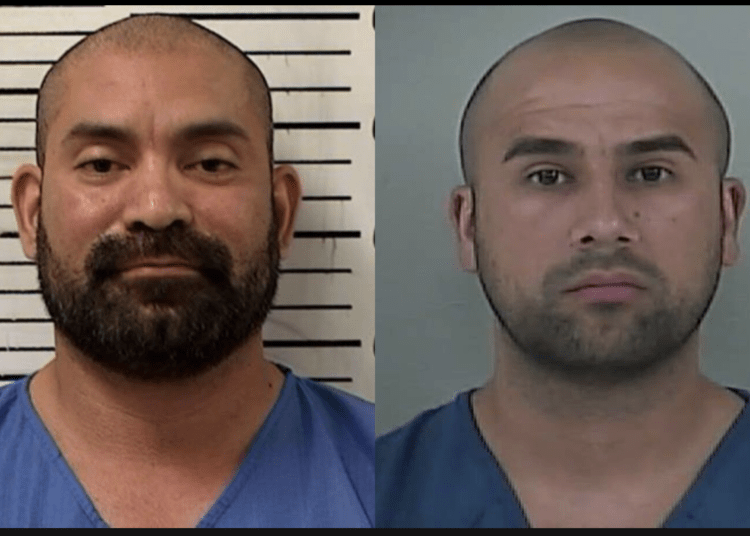 COLUMBUS, Ohio — Two narcotic officers from the Columbus Police Department were arrested and charged with various crimes connected to the distribution of 7.5 kilos of fentanyl and facilitating the safe passage of 27 kilos of cocaine. The investigators were part of the Police Drug Cartel Unit, according to a Wednesday announcement from the U.S. Attorney’s Office.

The officers taken into custody were identified as Marco R. Merino, 44, of Columbus, and John J. Kotchkoski, 33, of Marengo, Ohio.

According to an affidavit, Merino allegedly tried to recruit a confidential informant to traffic drugs with him, and promised law enforcement protection to the individual as part of the agreement, WSYX reported.

During the months of March, April, May, August, and September 2021, Merino accepted $44,000 as payment  in exchange for protecting the safe transport of at least 27 kilograms of cocaine, court documents said.

The U.S. Attorney’s Office said during the purported cocaine transport, it is alleged Kotchkoski made himself available by radio to make any calls that Merino might need, including to other law enforcement officials, to ensure safe passage of the cocaine, according to WSYX.

Merino allegedly distributed 7.5 kilograms of fentanyl that Kotchkoski provided to him between June and August.

Court documents revealed that Merino tried to gain citizenship in Mexico as part of a plan to launder their illicit narcotic proceeds. Moreover, he reportedly intended to purchase properties in Mexico to run as Airbnb destinations.

Sources said that Merino was arrested Tuesday morning at John Glenn International Airport. In was unclear when and where Kotchkoski was taken into custody.

Columbus Police Chief Elaine Bryant confirmed that both officers have been relieved of duty.

“These allegations are beyond disturbing. If proven, such actions would violate the oath our officers take, the standards we must hold ourselves to, and the trust of the public,” Bryant said. “These officers have been relieved of duty pending the outcome of their criminal cases. … This alleged conduct does not reflect the values of this division, or the excellent work being done by its employees. I will say it again: when my officers do what’s right, I will always have their back. When they don’t, they will be held accountable.”

Kent Shafer, a retired Columbus Police commander, called the case out of character for the department.

“You certainly don’t expect to hear this. It is totally out of character from what I know about the ethics and the way the police department has operated in my tenure there. Certainly a big surprise to all of us in law enforcement,” he said.

“There are a lot of policies and procedures put in place in a number of areas to try and keep track of that. The danger is that you have got a police officer who is now out in an undercover role acting as, and interacting with the criminal element. So we want to make sure the officer can do their job and get what they need in terms of evidence to charge people with crimes but stay within the ethical boundaries of what we expect a police officer to do,” Shafer said.

“Every report they write is read by the chain of command. Any evidence they turn in is compared to that report to make sure that all the evidence gets turned in. All their expense reports are compared to the case at hand to make sure they’re consistent with what the supervisors expect as far as that investigation. There is a tremendous amount of money involved in the drug trade. And oftentimes when you’re undercover long enough and interacting with criminals long enough you start to feel comfortable with that lifestyle. Which is why we often don’t leave officers in undercover roles for long periods of time,” Shafer, who is now a law enforcement consultant, said.

Consequently, Shafer said the circumstances could lead to a review of policies and procedures.

“For most officers, I don’t think it is a temptation. I think most officers believe in what they are doing and believe in the importance of doing it the right way. I am sure the narcotics bureau chain of command and police chain of command will look into all their policies and procedures to see if they missed anything. I am sure they will check to make sure any other officers that may have been associated with either these detectives or their cases are protected,” Shafer said. “Any case these detectives were involved in would be very hard to prosecute at this point, even if it’s a legitimate arrest it would be hard to prosecute. The officers were immediately relieved of duty and I am sure they will take every action that they can to ensure public trust. Officers are not above the law. They are not immune to enforcement. So when our officers do wrong, we take appropriate action,” he said.

Mayor Andrew Ginther expressed anger and discussed the harm it causes when building trust with the community.

“I am flat out angry. The allegations are disturbing and represent a complete breach of trust,” Ginther said. “It undermines our efforts to rebuild community-police relations at a time when we need to come together to make our neighborhoods safer. The selfish actions of these officers jeopardized the safety of their fellow officers and the community. We will hold these officers accountable, check the abuse of power and remain steadfast in our work to reform policing in Columbus.”