The tactical officer "snapped his leg in half," police said. 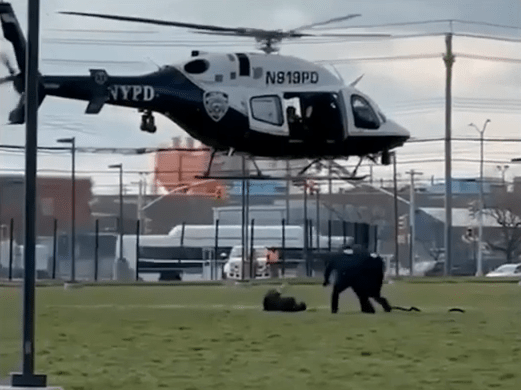 NEW YORK – A detective with the New York Police Department fell from a helicopter while fast-roping during a demonstration at the police academy in Queens Thursday morning, and “snapped his leg in half,” police said. The rope was not properly secured, causing the devastating fall.

Video of the shocking incident shows the detective dressed in tactical gear grab onto a rope to slide down from the chopper before it gives way about 11:20 a.m., reported the New York Post.

The rope was obviously not secured properly, which left the detective in a free-fall of what appears to be 15-20 feet to the ground.

It wasn’t clear if it was human error or an equipment malfunction that caused the dramatic mishap. Police sources said the officer’s leg was “snapped in two” during impact, according to The Post.

The unidentified detective was rushed to Jacobi Hospital to treat the broken leg, police said.

The demonstration took place as part of the NYPD Hostage Negotiating Team conference.