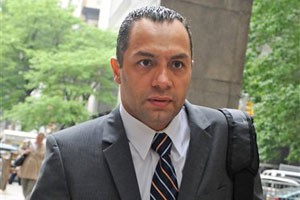 No Verdict Yet in NYC Officers' Rape Trial

No Verdict Yet in NYC Officers' Rape Trial

NEW YORK — Jurors have ended their first day of deliberations without reaching a verdict in the rape trial of two New York City police officers accused of preying on a woman they were summoned to help.

The jury is expected to start a second day of deliberations Thursday.

Officers Kenneth Moreno and Franklin Mata were called to help the drunken woman get home from a taxi in December 2008.

Moreno is accused of raping the now 29-year-old woman while she was physically helpless after passing out. Prosecutors say Mata stood watch.

Moreno says the woman made sexual advances, and they cuddled in her bed but didn't have sex.

Jurors requested a transcript Wednesday of a taped conversation between the woman and Moreno in which he denied having sex but also said he wore a condom.