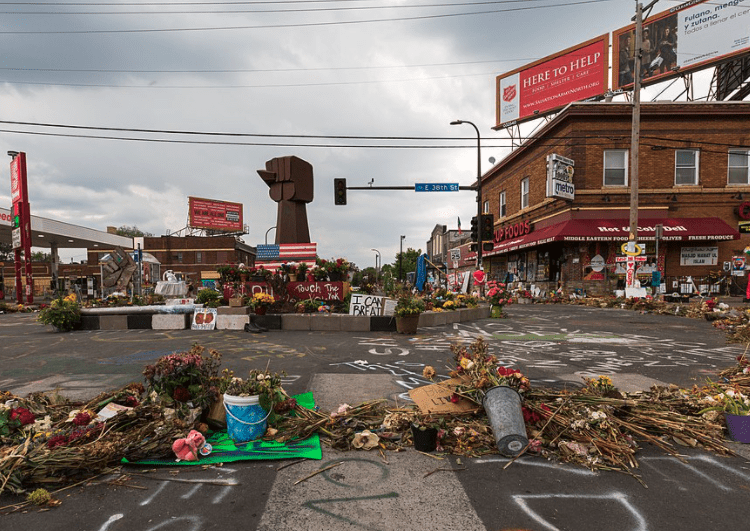 MINNEAPOLIS — The National Police Association (NPA) is putting pressure on the Minneapolis City Council, arguing residents living near George Floyd Square have suffered alone for months under an “autonomous zone,” as already depleted police resources are pulled away from the neighborhood to prepare for “inevitable rioting” to come in the trial of former officer Derek Chauvin.

It has become a place where militants rule, Law Officer reported. The area is hostile to law enforcement, the media, and most recently, to other protesters as well.

Retired Sgt. Betsy Brantner Smith, spokeswoman for the NPA, said in an exclusive interview with Fox News this week that demonstrators have been camping out for months in a small “autonomous zone” set up by George Floyd Square, at the intersection of E. 38th Street and Chicago Avenue, renamed in his honor following the custodial death of May 25, 2020.

“George Floyd Square is now an autonomous zone. They just had a homicide there,” Smith told Fox News, explaining that violence in the area has been an ongoing problem since last summer’s riots. “There are businesses especially near the Third Precinct — that was allowed to burn down — that get robbed by the same people two to three times a week. There are citizens who just can’t get police services.”

The six-block area, which Smith says has a rule that “no white people” are allowed, further exacerbates problems for the Minneapolis Police Department — down about 250 officers from what’s required by the City Charter. And the council, which was forced to hand over $6.4 million last month for officer recruitment, is already advancing another proposal to replace the police department altogether.

“The police are literally barricaded from going in there,” Smith said, explaining that the zone, focused at a gas station and convenience store, also includes residential housing. “It’s very frustrating because it’s already a very disadvantaged area to begin with. Then, of course, last May and into the summer, there were the riots that further decimated it, and now you have this area where the police — who are already short-staffed — aren’t allowed to go in.”

Last year, there were 19 nonfatal shootings in the area — 14 of which occurred between May 1 through August 31, according to NewsNation Now. There were just three shootings in 2019.

“The situation at the memorial, from what I understand, is its kind of volatile,” Kim Griffin, a Minneapolis resident, told the news organization. “People that want to go and support doesn’t feel a sense of inclusion. There is more of a like militant-type atmosphere over there and a sense of fear.”

Griffin said her nephew, Imez Wright, was gunned down within the zone over the weekend — and that activists blocked police from responding, Law Officer reported.

The Minneapolis City Council and Mayor Jacob Frey “have sought to circumvent the mandates of the City Charter by reducing the number of police officers through political budgetary maneuvering,” the nonprofit said.

Yet a real public safety crisis continues, the amicus brief argues, as Minneapolis, as of Dec. 10, 2020, recorded 532 gunshot victims — more than double the number reported last year. Carjackings were up 331% from the same period the year prior and violent crimes surpassed 5,100 — over 1,000 more than what was reported in 2019, according to the brief.

And those are the reported crimes. Law enforcement officers say many more go unreported since there is a feeling of hopelessness.

“Without the adequate number of police officers as the police force, the current Minneapolis public safety crisis will continue to no one’s benefit,” the brief says, Fox News reported.

Meanwhile, as jury selection in the Chauvin trial begins high above street level on the 18th floor of the Hennepin County Government Center, concrete barriers, chain-link fencing and barbed and razor wire protect the courthouse down below. National Guard troops and police stand guard as hundreds gather outside the barriers.

Smith said Minneapolis is preparing for “inevitable rioting” because “no matter how this case turns out, there likely will be violence.” The police department is short about 250 officers, in part due to retirements, injuries and post-traumatic stress officers experienced during riots over the summer, she said. And the security issue right now falls largely on the Hennepin County Sheriff’s Office.

“You have to look at the make-up of the city council — you have two extremely radical city council members who are continuing to push for abolishing the police department,” Smith said.

Minneapolis and Hennepin County officials said they would spend at least $1 million to put up fences and other barricades before the trial against Chauvin. Minneapolis officials estimated $645,000 would be spent to protect the city’s five police precincts, City Hall and the Public Service Building. County officials said the initial cost for leasing and installing barriers around the courthouse is about $420,000.

Under the City Charter, the council must fund a police force of “at least 0.0017” employees per resident, and provide for those employees’ compensation, for which purpose it may tax the taxable property in the city up to 0.3% of its value annually, the NPA brief says.

Minneapolis resident Cathy Spann and others filed a petition arguing that based on the city’s population, 743 officers must be on the force to meet that requirement, but “because of attrition caused by a hiring freeze, canceled police training, and the large number of officers on medical leave,” that number currently stands at about 634 officers.

“The Minneapolis City Charter provision requiring a minimum police force is a social contract between the government, the public and police,” Minneapolis attorney Erick Kaardal, lead counsel for the NPA on the brief, said in a statement last month. “The police collective bargaining agreement incorporates that social contract. Therefore, if the City Council is going to defund the police beneath the city charter’s limits, the Minneapolis City Council needs to get approval from the public and the police federation first.”