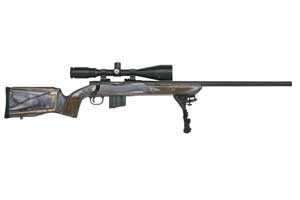 NORTH HAVEN, Conn. — O.F. Mossberg & Sons, Inc. announces a new line of dedicated varmint and predator bolt-action rifles, the MVP (Mossberg Varmint Predator) Series, based on the overwhelming success of the Mossberg 4×4 centerfire rifle. The engineers at Mossberg combined this classic bolt-action platform with the features most highly-desired by dedicated varmint and predator hunters and long-range competitive shooters in this innovative and well-designed series. Notably-setting this family of rifles apart from the competition is its unique, patent-pending bolt design which allows MVP Series rifles to accept and reliably feed from AR-15 style magazines; a breakthrough innovation in bolt-action platforms!

The first rifle in this ground-breaking series, the MVP Series Varmint chambered in 5.56mm NATO (.223 Rem), was recently unveiled at the 2011 NRA Convention in Pittsburgh, PA. Two initial offerings will be available this summer including a standard rifle package with 10-round magazine and factory-installed, Weaver-style bases for customization with optics of the shooter’s choice. The second is a convenient combo package which includes the rifle, pre-mounted and bore-sighted 4-16x50mm variable riflescope, bi-pod and 10-round magazine.

The MVP Series Varmint Rifle, chambered in .5.56mm NATO (.223 Rem), has a 1:9 twist rate to optimize bullet performance and accuracy from the 24-inch button-rifled, medium bull barrel which also features a varmint-style crown to protect the muzzle. Stylish fluting reduces weight and increases heat dissipation. The helically-fluted bolt further reduces the rifle’s overall weight and adds to its distinctive look. The innovative, patent-pending bolt design allows the rifle to accept AR-15 style aftermarket magazines and the 10-round magazine included from the factory. All metalwork features a matte blue finish.

The grey laminate, benchrest-style stock has an ergonomically-designed pistol grip with palm swell and is pillar bedded for the utmost in shot placement repeatability. Stippling on the forend and pistol grip provide for positive hand placement in any weather condition while the deeply-relieved area behind the pistol grip increases wrist and forearm comfort during long shooting strings. The comb is parallel to the bore centerline to eliminate parallax errors. The wide, flat-bottom forend is perfect for sandbag rests or bipod use.

Performance and accuracy are key to long-range shooting and the MVP Series Varmint rifle, as with all 4×4 bolt-actions, comes standard with Mossberg’s Lightning Bolt-Action (LBA) Adjustable Trigger System. Built with durability and reliability in mind, the LBA trigger assembly is machined from aircraft-grade aluminum and hard-coat anodized to military spec, preventing corrosion and minimizing wear. The trigger blade blocks the sear from releasing the striker unless the blade is fully depressed, even at the lightest adjustment setting. And with a simple twist of a standard screwdriver, the LBA trigger is adjustable from 2 to 7 lbs, providing the shooter with the flexibility of adjusting the trigger pull without taking the rifle to a gunsmith. With its distinctive, skeletonized “lightning bolt” trigger blade, the LBA Trigger System offers a truly crisp, creep-free trigger, optimizing accuracy and shot-to-shot consistency.

Other standard features on this MVP Series rifle include sling swivel studs and factory-installed Weaver-style scope bases. Built for performance and featured-packed, this varminter weighs in at mere 7 ¼ lbs and can deliver MOA accuracy right from the box!

This first offering in the MVP Series combines the performance, features and value that hunters and shooters worldwide have come to expect from Mossberg. Be one of the first to own a MVP Series Varmint rifle, see your local Mossberg retailer today.

About O.F. Mossberg & Sons, Inc.
Founded in 1919, O.F. Mossberg & Sons, Inc. is the oldest family-owned firearms manufacturer in America, and is the largest pump-action shotgun manufacturer in the world. Leading the way with over 100 design and utility patents to its credit, and standing as the first ISO 9001 Certified long-gun manufacturer, Mossberg is considered to be one of the most innovative firearms manufacturers in U.S. History. For more information on commercial, special purpose, law enforcement and military shotguns, rifles and accessories, please visit their website at www.mossberg.com.